Harrington: Players who have turned down LIV Golf not given enough credit

Padraig Harrington says the players who have turned down millions from LIV Golf don't get enough credit. 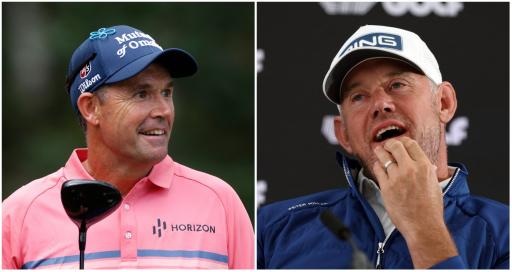 Padraig Harrington says the players who haven’t gone to LIV Golf “don’t get enough credit” as he revealed there’ll likely be a solution to the Ryder Cup conundrum in the coming weeks.

Harrington recently spoke to the media about his stunning win at the US Senior Open after he held off a final round charge from his Ryder Cup nemesis Steve Stricker.

The 50-year-old, who has claimed three majors alongside his 15 European Tour wins and six PGA Tour victories, was also pressed on what he predicts will happen with the future of the Ryder Cup.

This week, the United States’ Ryder Cup captain Zach Johnson suggested that LIV Golf Invitational series players hoping to make the team in Rome would be in for disappointment.

“I’ll let you connect the dots from there,” Johnson, 46, ominously told the media ahead of playing on the PGA Tour’s John Deere Classic at TPC Deere Run.

Harrington told the media he has not spoken to “the powers that be” at Ryder Cup Europe HQ but suggested after the conclusion of the Irish Open and Genesis Scottish Open that there would likely be a consensus of how to move forward.

“Hopefully between us all we'll come up with the right solution. There does seem to be two sides to it, doesn't there. The players who have gone, especially the players who have an option to go who haven't gone, certainly the fear of missing out means that they want very strong sanctions. Somebody who could go doesn't go, you can understand that they, God, should I have gone, should I not have gone, what was on the table. We're hearing players turning down huge sums of money.

“It is very interesting. As much as the media talks about the players who have gone, some of the players who haven't gone don't get enough credit -- we're not talking the very, very top, we're talking about sort of the type of Ryder Cup player who's turned down the $30million plus figures. It's very impressive that at the moment it seems like the players who are staying are the ones who are feeling like their careers are going on an upward spiral, that they're protecting their fear of wanting -- not protecting, they want to win the majors, and they think that's their future.

“So that seems to be the way it is, that the guys who are staying -- and fair play to them for turning it down and backing their careers. The other guys, it's big money on the table. Got to see -- when you've got skin in the game like that, I personally have not had an offer, good, bad or indifferent on either side of this, so I don't have skin in the game to make a judgment on how you would feel about it, but I'm certainly impressed with some of the players who have turned down large sums of money.

“It does kind of say something about how they think about their own games. That's for sure.”

The Irishman was asked about how he feels with golf’s apparent civil war.

Harrington said that he “feels” for the DP World Tour.

“It looks like the European Tour is the one who could come under the pressure and be squeezed.

“LIV looks like it's going to be here to stay. In three, four, five years' time, all of this could be very normalized, and there could be the U.S. Tour and the LIV Tour sort of thing, contending for the hearts and minds of the players.

“Yeah, it's certainly -- competition definitely pushes things on as we've seen with the PGA Tour. Let's hope that the European Tour can keep up. The pathway I would have had to where I was in golf was very dependent on the European Tour. I really built my game from '96 to 2004 on the European Tour, getting high enough up in the World Rankings that I could play the big events around the world, and then being able to dip my toe in the water sort of thing and experience those events before I then took my card in 2005 on the PGA Tour, which is a big step for any young guy going over there. You're thrown into a -- out of your comfort zone. It's new. The lifestyle is new, the environment is new. You really want to be on top form.

“Europe has a great ability for players who stay there. We've seen greats who play in Europe over the years. It really does help develop a player in a protected environment in the sense of you're a top player in Europe, you're getting the right TV draws, you're getting treated like a star, which means when you go -- oftentimes as you remember when Monty went to the States, he was getting first or last tee times. He was taking the flags, putting the flags out or taking them in when he was No. 1 in the world, and that can be soul destroying for a player.

“So, we do need a very strong European Tour, and it is interesting. The European Tour is the one that could get squeezed out in this battle between -- obviously the U.S. PGA Tour is a giant in this whole thing, and LIV are coming in there to do battle with them, and certainly is there only enough room in golf for two big players and everybody else has to take a backseat.”

Asked about the Ryder Cup, Harrington said the situation could “add spice”.

“Yeah, you know, obviously if there's two big tours, it seems to be good for the majors, that the only time the best players would play is in the majors. That served the Ryder Cup really well over the years in the sense of if there was a rivalry between Europe and the U.S., like if I go back to when I played in '99, I didn't know the U.S. players. I had to be introduced. There was all sorts of conspiracy theories during the matches and things like that, whereas now we all play the same tournaments, so we're all quite friendly.

“Yeah, look, it could add spice to the Ryder Cup, but I don't know how that's going to end up in terms of whether the players can play or certainly with the captains and vice captains. It really is hard to know what is going to be the future of it.

“As I said, time will normalize things. There's no doubt about that. But it is very much up in the air at the moment, and we'll have to wait and see what certainly the LIV Tour seem to have. They seem to have -- how will I put this? A point to prove that they can go and do it.

“I think the fact that maybe when they were with PGL they were kind of turned away, now whether it's Greg who's always wanted this world tour or the LIV Tour itself, if they have commitment to do it, it looks like they will get it done in some shape or form.”