Pro on LIV Golf media storm: "It gave Greg Norman an incentive to put me in"

Robert Garrigus found himself in a media storm when he became the first PGA Tour player to request a LIV Golf waiver. 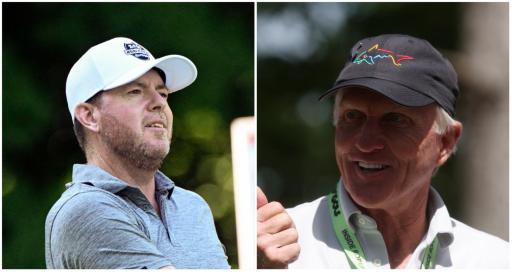 Here’s the thing about Robert Garrigus, he isn’t afraid to speak his mind. About LIV Golf, about the PGA Tour, about anything.

You most certainly don’t have to agree with everything he says but much like Pat Perez you have to appreciate his willingness to be so honest.

If you aren’t familiar with the name, Garrigus found himself in the middle of a media storm a few months ago when it was revealed that he was the first PGA Tour player to request a LIV Golf waiver.

That story was first revealed by Golfweek and he was the subject of a number of articles across the golf media. At the time, he was ranked 1043rd in the OWGR.

That was at the top of most headlines and barbs aimed at the upstart golf league that is spearheaded by Greg Norman and bankrolled by Saudi Arabia’s Public Investment Fund.

Now Garrigus has spilled all the details in The Grind, a podcast hosted by The FirePit Collective’s Ryan French.

You can listen to it here.

We would urge you to listen to it, Garrigus explains why he applied to play in the first LIV Golf tournament at Centurion and perhaps why Norman should’ve given him “a chunk of cash” as he was the first to go.

Garrigus claims that the only person who knew about his application for a waiver was his agent and therefore when his name was leaked it was likely someone from the PGA Tour.

“It was kind of interesting how all of that came about because I got a sponsor invite [to the Zurich Classic in the same week] to play in New Orleans and I thought that was kind of s***** timing for the whole situation.

“I’m not even a top player. I don’t even know what the benefit of that was, for my name to come out but however it did, I don’t give a f*** anymore, it was silly.

“I fell on my sword, and I didn’t even mean to but that actually gave Greg Norman and incentive to put me in the tournament in the first one at least to give me a chunk of cash for saying, ‘Hey, thanks for diving into the pool first.”

He added: “I’m basically reserved to the fact that I’m not that relevant in golf with my world ranking but I’m very outspoken with all the guys on Tour. Everybody knows me out there and knows I don’t have a filter.”

After sending in that waiver request to play in the first LIV Golf event, Garrigus explained that he had a meeting with PGA Tour commissioner Jay Monahan.

He said: “I had a meeting with Jay that week. We’ve had several [meetings] and I don’t think he’s enjoyed very many of them just for the fact that I will speak my mind.

“I talk to Jay like he’s a cook at Chili’s. I will give him the business if I don’t like what I’m seeing and it’s one of those things that … I can voice my opinion to Jay because he works for me.

“You can speak your mind to the commissioner of the Tour that you’re playing on because he works for you and I voiced my opinion.

“I was like, ‘Listen, this isn’t about the money. If you give me the spots to play in PGA Tour events I will tee it up, but right now, I am not playing much golf and if you really don’t think that I’m gonna playing a lot of tournaments then what does it matter if I go play another tour?

“I didn’t get it at the time. Now, I kinda get it [with] what’s going on because the LIV tour is trying to cut the f***ing legs out from underneath the PGA Tour and trying to make sure we don’t exist.

“That’s getting to a boiling point and that’s going to keep going.”