Dustin Johnson after his $30m LIV Golf season: "I *really* REGRET my decision!"

Dustin Johnson joked he regretted his decision to join the LIV Golf Tour after bagging a bonus of $18m before weighing in on the world ranking debate. 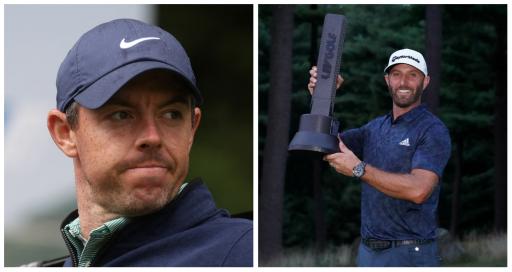 Dustin Johnson joked he "regretted" joining the LIV Golf Tour after bagging a bonus of $18m for becoming the controversial series' individual champion of their inaugural $255m season.

The 38-year-old American, who was one of the first players to jump ship to the breakaway tour and resign his PGA Tour membership, has been in scintillating form over the first six LIV events.

He claimed victory at LIV Golf Boston, picking up $4m after draining a 40-foot bomb for eagle on the first hole of a three-man playoff. Elsewhere, he's also had five top-10 finishes.

It means that to date, Johnson's on-course earnings with LIV now total a mind-boggling $30,758,600. His fee to join the tour in the first place was reportedly north of $100m.

Last weekend in Bangkok, where he got a little bit jumpy on the course because of the thunder, he finished in 16th place.

That left him with an unsurmountable 42-point advantage over South Africa's Branden Grace (who had to withdraw injured in Thailand) before the individual competition concludes this week in Jeddah.

Dustin Johnson finally admits that he regrets his decision to join #LIVGolf pic.twitter.com/XdQ5d3Iy6Z

Johnson, who captains the 4 Aces side, faced the media at Royal Greens Golf & Country Club this week alongside Harold Varner III and Graeme McDowell.

Of course, one of the big talking points was whether or not LIV Golf will start achieving world ranking points soon.

Related: LIV Golf "ready" to introduce cuts to their events

"I think the media and everybody is starting to finally catch on that this is not a joke, it's real golf, and we've got some of the best players in the world. Obviously we don't have all of them, but we've got enough of them." pic.twitter.com/byce7ExMtL

But Johnson was first asked how he would describe his four months so far with Greg Norman's league.

"How would you describe this four and a half month journey you've had with LIV? Has it met your expectations? Exceeded it?"

Johnson replied: "We talked about this yesterday. I really regret my decision to come here. It's just so terrible."

There were laughs in the room.

He continued: "I'm sitting there last night thinking about it, it was really bothering me a lot. Yeah, [I] just can't get over it."

"We're going to get world ranking points," he said.

"Just right now it's another way. And the longer it takes, you know, obviously the more low [we will go down in the rankings] it becomes for us. If we wait too long, all of our rankings are going to drop so much, it's not going to matter.

"We are hoping they [the OWGR] do the right thing, and all of us hope to hear in the next week or so and this will all go away."