Pat Perez had a simple message to his haters after LIV finale: "Shut up"

Pat Perez had a message for his haters after the 4 Aces GC won LIV Golf's $50m team championship in Miami at Trump National Doral. 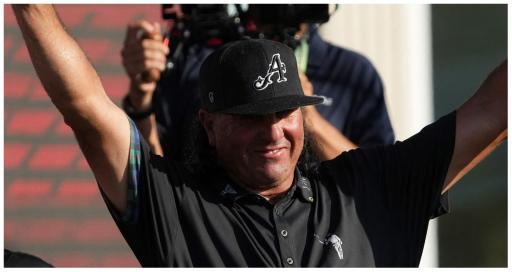 But it's fair to say that it has not been the easiest of rides for the 46-year-old American. Of course, he has been amply compensated.

The first was that Perez and the rest of the LIV players were accused of being complicit in helping to soften Saudi Arabia's global reputation through sport.

It's a practice known as sportswashing and Perez batted away these criticisms when he made his debut earlier in the year.

He further turned heads when he rocked up to one of LIV Golf's draft parties wearing a shirt with dollar bills on it. There were zero f***s given.

On the course, Perez has also attracted a bit of heat for his apparent lack of contribution to the all-American 4 Aces side, captained by Dustin Johnson.

Perez even mocked himself for it at times. Even DJ ribbed him after he won LIV Golf's Invitational in Chicago:

Related Articles
Patrick Reed "burner" goes after Sir Nick Faldo after he obliterates LIV Golf
PGA Tour want PIF and Al-Rumayyan added to counter lawsuit against LIV Golf
"We had a team dinner on Friday night after the first round, and yeah, we told Pat to just do Pat.
"Just wear shorts, do whatever you want, hat backwards, whatever. Just play better."

Fast forward to October 31 and LIV's "beta test" $255m season is in the books. And Perez has made an absolute bomb.

That accounts for nearly one third of his 20-year career earnings on the PGA Tour.

Related: Why Pat Perez dropped out of antitrust lawsuit

Perez finally showed up on Sunday at Trump National Doral when it mattered most, carding a 2-under 70 on a tough course.

It was crucial because the 4 Aces won the event by one stroke. Immediately after victory, Perez took had a message for the haters:

"I get a lot of grief for never [showing] up, I did today so everybody can shut up, which is great."

"All the push-back, all the negative comments, everything we've gotten, at this point I really don't care. I mean, I don't care. I'm paid. I don't give a damn.
"My team played unbelievable this year. I feel like I'm really part of something that I've never been part of, other than me and my caddie, we've just been just us our whole life.
"To have these guys and their caddies and families and coaches and everybody, it's just one big family now. I just couldn't be any happier. It's unbelievable."

Elsewhere, LIV Golf will rebrand to the LIV Golf League in 2023. They have announced as many as 60 players will take part in 14 events globally.

Last week Atul Khosla, LIV Golf's chief operating officer, provided an update on where they are with "various" TV networks over a reported deal.