Phil Mickelson addressed the media at Centurion Golf Club and he consistently declined to address issues with the PGA Tour and Saudi Arabia's human rights issues. 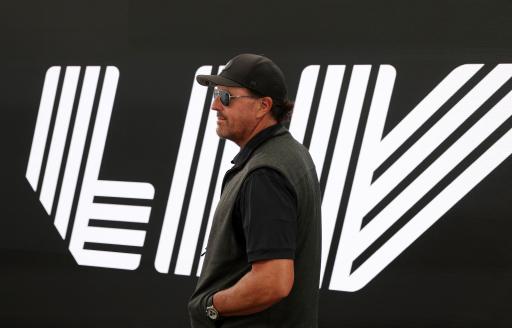 Phil Mickelson declined to speak about PGA Tour issues as he spoke to the media for the first time in four months at the inaugural LIV Golf event at Centurion Golf Club.

Mickelson, a six-time major champion, believes he does not deserve to give up his PGA Tour lifetime membership despite accepting a $200 million appearance fee to compete in Greg Norman's controversial new LIV Golf series

The 51-year-old reaffirmed that he will play at the US Open next week at Brookline. The US Open is the final part of his major grand slam and it is a tournament he has come runner-up on six occasions.

In terms of potential bans given from the PGA Tour, Mickelson declined to comment on this matter and he also asserted he doesn't condone human rights violations with reference to the death of Jamal Khashoggi.

"I've certainly said and done a lot of things that I regret and I am sorry for that and for the hurt that it's caused my people. I don't condone human rights violations at all.

"Nobody here does and throughout the world. I'm aware of what's happened with Jamal Khashoggi and I think that's terrible. I've also seen what good the game of golf has done throughout history and I think that LIV Golf is going to do a lot of good for the game as well.

"I don't condone human rights violations, I don't know how I can be more clear. Again, I love this game of golf and I've seen the good that's done and I see the opportunity for LIV Golf to do a lot of good in the game throughout the world and I'm excited to be part of this opportunity.

The 2021 US PGA champion walked away from the game in February after his controversial comments were made public by reporter Alan Shipnuck.

He chose not to defend the US PGA at Southern Hills earlier this month and his appearance in the first event of the LIV Golf Invitational Series will be his first appearance since the Saudi International in February.

Mickelson announced on Monday night that he would play at Centurion Club this week. He attended the team draft on Tuesday night as the captain of the "Hy Flyers" team.

Mickelson described his time away from the game with his wife Amy and he was extremely reflective of his period away from the PGA Tour.

"I've had an awesome time. I've had a four-month break from the game that I've not had for over three decades. I've had an opportunity to spend time with my wife Amy, travelled parts of the world and spent time in a place in Montana we have skiing and hiking.

"This is an opportunity that allows me to still have golf in my life, but also, to have a balance where I can be more present. I can be more engaged with people I really care about."

Next Page: Phil Mickelson WILL COMPETE in the Saudi-backed LIV Golf event in London