Phil Mickelson has confirmed his place at the last second in the inaugural LIV Golf Invitational Series tournament at Centurion Club this week. 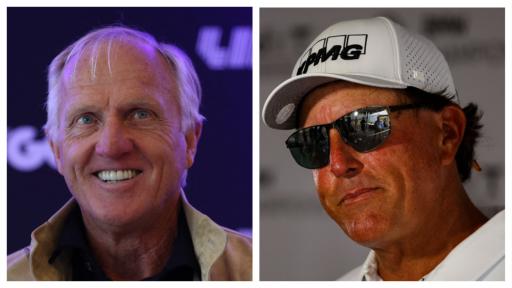 Phil Mickelson has confirmed his place at the last second in the inaugural LIV Golf Invitational Series tournament at Centurion Club, which starts this Thursday and ends on Saturday.

Mickelson, 51, will be making his first competitive start since taking a break from the sport following his controversial comments made to biographer Alan Shipnuck.

Since his four-month break from the game, Mickelson has slipped from 38th to 72nd in the Official World Golf Rankings.

Mickelson took to his social media to confirm the news, along with an apology for the people he "offended and hurt" with his comments earlier in the season.

He also confirmed he will be competing in the majors, which means we will likely see Mickelson tee it up in next week's US Open - where he will attempt to complete the career grand slam - and the 150th Open Championship at St Andrews this July.

It is understood Mickelson will receive in the region of $200 million for taking part in the LIV Golf series.

"First and foremost, I want to again apologise to the many people I offended and hurt with my comments a few months ago," writes Mickelson. I have made mistakes in my career in some of the things I have said and done. Taking time away and self-reflecting has been very humbling. I needed to start prioritising the people that I love the most and work on becoming a better version of myself. I have spent this time with Amy and loved ones. I have been engaged and intentional in continued therapy and feel healthy and much more at peace. I realise I still have a long way to go, but I am embracing the work ahead.

"I am ready to come back to play the game I love but after 32 years this new path is a fresh start, one that is exciting for me at this stage of my career and is clearly transformative, not just for myself, but ideally for the game and my peers. I also love the progressive format and think it will be exciting for fans. Just as importantly, it will provide balance, allowing me to focus on a healthier approach to live on and off the course. I am incredibly graceful for what this game and the PGA Tour has given me. I would like to think that I have given back as well but now I am excited about this new opportunity.

"I am thrilled to begin with LIV Golf and I appreciate everyone involved. I also intend to play the majors. I fully realize and respect some may disagree with this decision and have strong opinions and I empathize with that. I have a renewed spirit and excitement for the game. I am incredibly proud for the support of my fans, partners, friends and peers, and I hope in time, those sentiments, relationships and support continue."

The LIV Golf opener will be played over 54 holes and the winner of the tournament will receive $4 million.

A staggering total of $25 million will be up for grabs, with the golfer finishing last still walking away with a cool $120,000.

Related: Here's everything you need to know about the LIV Golf Invitational Series

"Phil Mickelson is unequivocally one of the greatest golfers of this generation," said LIV Golf commissioner and two-time major winner Greg Norman.

"His contributions to the sport and connection to fans around the globe cannot be overstated and we are grateful to have him. He strengthens an exciting field for London where we’re proud to launch a new era for golf.

"Our International Series qualifiers have earned an incredible opportunity to compete in LIV Golf’s new format, and I’m eager to watch all of them tee it up next week.

"This is a once-in-a-lifetime opportunity for many of them, and that has been a driving force behind our mission at LIV – creating player pathways and new opportunities to play the game we all love."

Mickelson, who became the oldest major champion at last year's US PGA Championship, last played a competitive tournament when finishing tied 18th in the Saudi International.

Lefty joins a number of PGA Tour players to break away to the LIV Golf circuit, including former World No.1 Dustin Johnson, who was reportedly offered in the region of $125-£150 million.

It will be interesting to note which equipment Mickelson turns up with at Centurion Club this week after his long-term deal with Callaway was frozen.

Mickelson also lost a number of his other sponsorship deals, including his big deal with KPMG.

According to reports today, Tiger Woods turned down a huge nine-figure sum to take part in the LIV Golf series.

Other players in the field include a number of Ryder Cup stars such as Sergio Garcia, Ian Poulter, Lee Westwood and Graeme McDowell.

Golf Channel reporter Rich Lerner broke the news of Mickelson's place in the field earlier this afternoon, and he also believes Rickie Fowler will soon be making the move to LIV Golf.

Mickelson has amassed a whopping $95 million in career earnings on the PGA Tour to lie second behind Tiger Woods, who has $120 million.

Johnson is in third in the all-time money list with just shy of $75 million.

Bosses at both the DP World Tour and PGA Tour have made it clear that any of their members competing on the LIV Golf Invitational Series will face bans, but as it stands nothing has been made official.