Phil Mickelson and Rickie Fowler have both decided to play in the LIV Golf Invitational Series, according to reports. 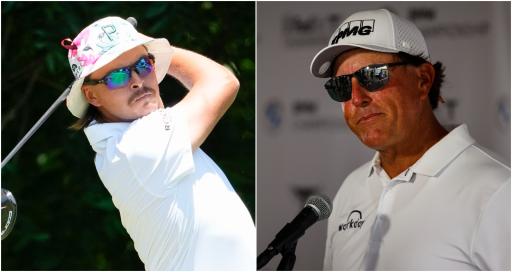 Both Phil Mickelson and Rickie Fowler have decided to commit their futures to the Saudi-backed LIV Golf Invitational Series, the Golf Channel have reported.

CONFIRMED! PHIL MICKELSON IS BACK AND HE WILL PLAY IN THE LIV GOLF EVENT AT CENTURION CLUB

According to the golf reporter Rich Lerner, both Lefty and Fowler will "imminently" be heading to the LIV Golf Invitational Series which is due to kick off this Thursday at Centurion Club in St Albans.

Mickelson was not named in the initial list of confirmed competitors last week by LIV Golf Investments. Curiously, a spot was left open which prompted speculation that it could be filled by Mickelson.

The 51-year-old six-time major champion has not spoken publicly since he went into self-imposed exile in February after his "reckless" comments to the biographer Alan Shipnuck were made public.

In those remarks, of which he has apologised for, Mickelson said he was happy to overlook the human rights abuses of the "scary" Saudis because it was a once-in-a-lifetime opportunity to re-shape the PGA Tour and how it operates.

He previously accused the PGA Tour of "obnoxious greed" as he alleged they were sitting on a slush fund of hundreds of millions of dollars that was made through players' media rights.

PGA Tour commissioner Jay Monahan said "the ball" was in Mickelson's court with regards to a potential return.

Though it looks like Mickelson has two options: get fully behind the LIV Golf Invitational Series or apologise to the PGA Tour and try to repair his reputation.

Golf Channel's reporting suggests that Mickelson has drawn a line in the sand.

Rickie and Phil to LIV imminent. How will The PGA Tour respond? The USGA? Chatter consuming the sport.

It was reported last week that Mickelson felt like there was "still too much" heat on him ahead of the opening event later this week.

That was before LIV Golf Investments managed to get Dustin Johnson to change his mind and accept their $125million offer to play in the series.

Each 54-hole tournament of the global series will have a $25million prize purse, with $4million going to the winner.

Mickelson has been filmed - once - at his local club playing golf in the last few months but the video violated member policy and it was swiftly deleted.

There were reports over the weekend that Mickelson was playing golf again. It's not known whether or not Mickelson or Fowler will be in the field on Thursday.

Fowler previously said that he was "keeping his options" open as he hinted towards a future away from the PGA Tour.

Kevin Na last week resigned his membership from the PGA Tour to play in the series.

How will the PGA Tour respond? Watch this space.