LIV Golf commissioner Greg Norman is set to be "moved upstairs" and be replaced by the former chief executive of TaylorMade, according to a report. 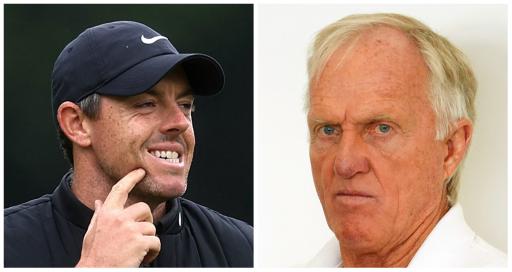 LIV Golf League commissioner Greg Norman is set to be "moved upstairs" and replaced with the former chief executive officer of TaylorMade, according to a report by James Corrigan of The Daily Telegraph.

It has been suggested that LIV Golf have already held discussions with Mark King, 60, who has reportedly been at several LIV Golf tournaments in their inaugural eight-event $255m season that came to a close in October.

Corrigan quotes an insider as saying:

"There are a number of extremely professional executives already there, but a serious figure like King could be just what they are looking for to take the next step.
"The Saudis have already committed more than $2bn to this and clearly want the business plan to be defined and for it all to be seen as rather less chaotic. The fact it has been frenetic is completely understandable as they have had to do everything off the hoof and where they have got to off a standing start - albeit with an open chequebook - is impressive.
"But now it is time for calm heads and a clinical vision that someone like King could provide. And if the PGA Tour and DP World Tour want to negotiate then King is a much less combative character than Norman"

Related: How much they all won in LIV's first season

Norman was announced as the chief executive of LIV Golf Investments last October.

He has been a contentious figure in the professional golf world ever since. Norman has been involved in a number of gaffes, particularly when trying to defend Saudi Arabia's human rights abuses.

Norman caused particular consternation when he said "everybody makes mistakes" when pressed on the murder and dismemberment of Washington Post journalist Jamal Khashoggi.

Such has been the contentious nature of LIV Golf Norman was disinvited to the past champions' celebrations at the 150th Open Championship at St. Andrews in July.

Norman has also been feuding publicly with the likes of Rory McIlroy, with the two taking constant digs at each other. He has also traded barbs with PGA Tour commissioner Jay Monahan.

He famously wrote "surely you jest" in an email to Monahan when the established, American circuit threatened to ban players teeing it up in LIV Golf events.

It appears that LIV want to get away from this controversy in 2023 when it expands its schedule to 14 events with prize money of $405m.

The Telegraph report that King grew sales from $300m to $2bn with TaylorMade before he served as the president of Adidas. He is currently the CEO of Taco Bell.

The publication also report that King has already met with Yasir Al-Rumayyan.

Al-Rumayyan is reportedly refusing to testify in the PGA Tour's lawsuit.

LIV Golf reportedly had no comment, according to the publication.