LIV Golf commissioner Greg Norman has called for "the forces in golf" to come together but not before aiming another dig at Rory McIlroy. 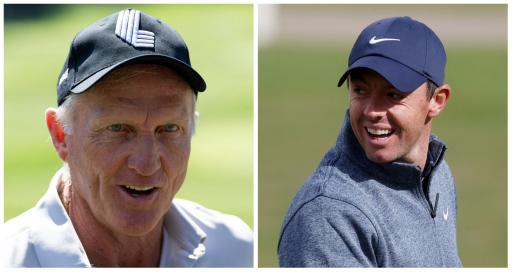 LIV Golf commissioner Greg Norman believes it's time "for the major forces in golf to make the good of the game we all love the priority" as he delivered another dig at Rory McIlroy.

Maybe Norman didn't get the memo as Northern Irishman McIlroy, 33, now has an approach that appears to be in direct contrast with the PGA Tour and their chief Jay Monahan.

McIlroy now believes there is "no time to waste" and he has urged the warring tours to navigate a path forwards.

From the very beginning, Norman has claimed everything LIV Golf has done and will do is for "the good of the game".

Even PGA Tour prospect Sahith Theegala is loving it at the moment.

"We need to stick together and find a way to ensure that in the future there are no splits like the one we are witnessing today."

On Wednesday, Norman took the time to post this message on his social media channels:

From dead in the water to an important part of the future of golf all in 8 months. #LIVGolf has only just begun.

It’s time for the major forces in golf to make the good of the game we all love the priority. @LIVGolfInv will continue to do its part.

Of course the "dead in the water" remark is in reference to when McIlroy famously claimed LIV was over before it started.

In fairness, Phil Mickelson really did almost bring down the whole show according to one of the LIV bosses.

In case you forgot, those comments from McIlroy came at the 2022 Genesis Invitational.

It was around this time that LIV was gathering steam behind closed doors and a number of high-profile players resorted to releasing public statements declaring their allegiance to the PGA Tour.

Related: Has Xander Schauffele made up his mind about LIV now?

"Yeah, who's left? Who's left to go? I mean, there's no one. It's dead in the water in my opinion. I just can't see any reason why anyone would go."

Related: How much they all won in LIV's first season

Well, things do look a lot different in the landscape of professional golf today. DeChambeau and Johnson have signed multi-year deals with LIV. More are expected to follow.

At this juncture there is simply no end in sight.