Court documents reveal the PGA Tour spoke to Anthony Kim about the LIV Golf Tour in their ongoing lawsuit against their new rival. 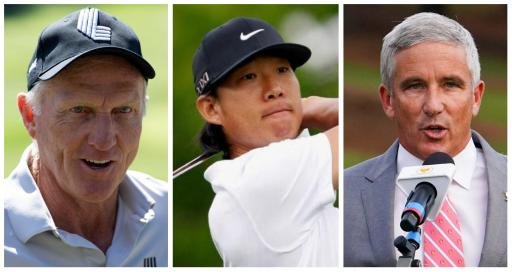 Court documents reveal the PGA Tour spoke to Anthony Kim in their ongoing lawsuit against the LIV Golf Invitational Series.

As first reported on by SI's Alex Miceli, the little nugget was revealed when court documents were sifted through after a discovery hearing on 17 October.

That discovery hearing was in front of the U.S. District Court in the California Northern District before judge Susan van Keulen.

It gets a bit complicated, but essentially the hearing was to determine "how much latitude in discovery" the judge would give LIV Golf and the PGA Tour.

One of the primary issues in the hearing was Interrogatory No.1.

Interrogatories are written questions and answers that are broad in scope.

This is the question LIV Golf posed to the PGA Tour:

Identify each individual who communicated on behalf of the PGA Tour with any other person (including Tour Members) or entity regarding any New Tour. Your response should include individuals who communicated with (a) the European Tour, (b) Augusta National, (c) PGA of America, (d) USGA, (e) OWGR, (f) Royal & Ancient, (g) Asian Tour, (h) Japan Tour, (i) Sunshine Tour, (j) Ladies Professional Golf Association, (k) Ladies European Tour, (l) any broadcaster, (m) any vendor or service provider to the PGA Tour, (n) any advertiser or sponsor, (o) any player agent or representative, (p) any golfer (including PGA Tour Members), or (q) any other person or entity not expressly excluded by this Interrogatory. Your response need not include communications with the PGA Tour’s counsel or the press. For each individual you identify, identify the date(s) of the communication(s), the medium of the communication(s) (e.g., in-person, phone, text, email, etc.), and the other person or entity to whom the communication was made.

Initially, the PGA Tour argued the question was too broad.

However, after a further hearing judge van Keulen filed an order on 19 October essentially ruling in LIV Golf's favour.

By 12 p.m. (PDT) on October 19, 2022, Defendant Tour is to identify in a verified interrogatory response all individuals who were authorized to speak on behalf of the Tour during the relevant time period (September 1, 2019-present; “Time Period”) regarding competitive or potentially competitive tours. The interrogatory response will indicate which individuals had verbal, in addition to written, communications regarding competitive or potentially competitive tours during the Time Period.

The response by the PGA Tour included 31 individuals who were listed as "Tour employees that were authorized to speak on the Tour's behalf since 1 September 2019."

There was reportedly an exhibit added where the PGA Tour listed 179 different entities involved in golf they had discussed their rival with or the Premier Golf League.

Of those 179 entities included the aforementioned Kim.

It has been reported that Kim had an insurance policy that would pay him in the region of $10-20m in the case of a career-ending injury.

Over the years, there has been furious speculation about weighing up the risk of coming back or not.

Kim has been the subject of a number of "What happened to Anthony Kim" articles and was even linked with a sensational move to LIV Golf.

In total, Kim won three times on the PGA Tour and played a starring role at the 2008 Ryder Cup at Valhalla where he made minced meat of Sergio Garcia.

The Spaniard, who plays on the LIV Golf Tour, recently confirmed his career in the biennial event is all but over.