Phil Mickelson's famously controversial remarks about his dealings with LIV Golf and the PGA Tour almost folded the series before it began, according to a report. 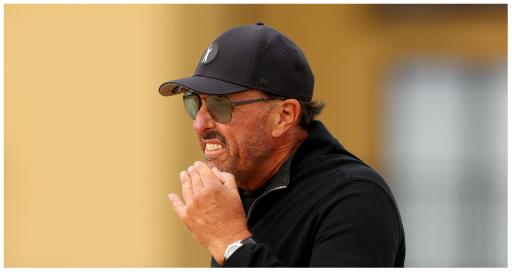 Al Sorour has given an interview to The New Yorker about LIV Golf, in which he spoke on a number of topics.

One of the most interesting aspects was the claim that if LIV players are banned from the majors next year then they would simply create their own.

There were also the curious claim that Al Sorour reportedly wanted to rent Augusta National's clubhouse during the Masters to "wine and dine" potential recruits.

But back to Lefty, who previously admitted his dealings with the Saudis and LIV Golf were really all about leverage.

In his report, New Yorker reporter Zach Helfand outlined the conversation Al Sorour had with Yasir Al-Rumayyan [the governor of the Public Investment Fund] after Mickelson's comments, that Lefty insisted were off the record, became public.

"I called the boss Rumayyan, I said, ‘Everyone’s walking away [from LIV Golf]. Do you want to do it, or not?’'" Rumayyan replied: “Get the biggest mediocres, get the ten that we have, get you and I, and let’s go play for $25m."

Mickelson's comments sparked a number of public statements from PGA Tour players, including the likes of Bryson DeChambeau, Dustin Johnson and Xander Schauffele, who declared their allegiance to the PGA Tour.

Most recently, Mickelson has claimed that he now believes he is on the "winning side".