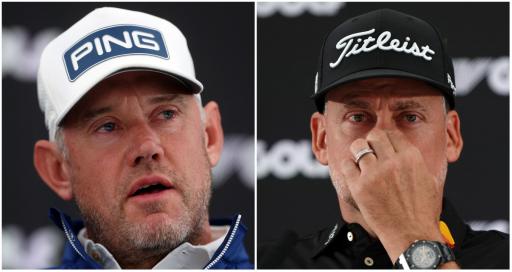 LIV Golf players Ian Poulter and Lee Westwood are reportedly among a group of 16 players who have sent a letter to the DP World Tour threatening legal action after they were fined £100,000 and suspended from three PGA Tour co-sanctioned events.

In a report by The Telegraph’s Jamie Corrigan, it is claimed that legal action will be taken against the former European Tour circuit unless they rescind their sanctions by Friday, 1 July.

Keith Pelley, the DP World Tour’s chief executive, previously drew a line in the sand by announcing the LIV Golf rebels, as they have come to be known, were all banned from playing the forthcoming Genesis Scottish Open, the Barbasol Championship and the Barracuda Championship.

The LIV Golf Invitational series, which has added Brooks Koepka, Bryson DeChambeau and Patrick Reed to their roster, launched earlier in the month.

The second event of the series, financed by Saudi Arabia’s Public Investment Fund, is taking place at Pumpkin Ridge Golf Club in Portland, Oregon this week.

It is said that in an open letter, 16 players claim the DP World Tour is being hypocritical for banning them while allowing others to feature in events outside their tour. They claim the penalties they have received are “grossly unfair and likely unlawful”.

This week the PGA Tour and DP World Tour announced a 13-year partnership. It follows on and strengthens the strategic alliance that was agreed between the two established circuits that was formed in the wake of a super league threat 20 months ago.

The Press Association’s Phil Casey reports that the DP World Tour have confirmed receipt of the letter and will respond in due course.

What does the letter say about legal action?

“The intention of this letter is not to further divide us, but to respond to Tour statements and to pose questions that the Tour should answer and we should discuss in detail. Instead of spending our time, energy, financial resources, and focus on appeals, injunctions, and lawsuits, we would implore you, the custodians of the DP World Tour, to reconsider your recent penalties and sanctions, and instead focus our energies on forging a path forward that is better for the DP World Tour members and the game of golf.

“To this end, we ask that you rescind your fines and suspensions by 5:00 pm on Friday, July 1, 2022. In addition, we represent over 5 percent of the DP World Tour membership and, under its articles of association, we ask you to convene a meeting of Tour membership to discuss these important matters further. If not, you will leave us  with no choice but to employ the various other means and methods at our disposal to rectify these wrongs.”

“We appreciate that the argument being put forward is that the ‘strategic alliance’ with the PGA Tour will provide overall benefit to DP World Tour members - hence the competitive threat to the PGA Tour being treated differently when it comes to releases and other matters,” the letter continued.

“To begin with, we do not accept that protecting the PGA Tour through this alliance could in any way justify this disparate treatment. Even if it could, what are these benefits? This a question we have asked for many months.

“Thus far, the option to play the Barracuda Championship instead of the Scottish Open doesn’t appear to be one that benefits the membership at all. Ultimately, approximately 40 DP World Tour members who would have been eligible for the Scottish Open on the DP World tour will now not be eligible, and instead will only have the option to go and play on the PGA Tour in Kentucky the week before The Open, for less money but at a higher cost to participate.

Next page: JT wants LIV Golf players to admit it's all about money