The LIV Golf players will reportedly be told they are not welcome at the Genesis Scottish Open next month. 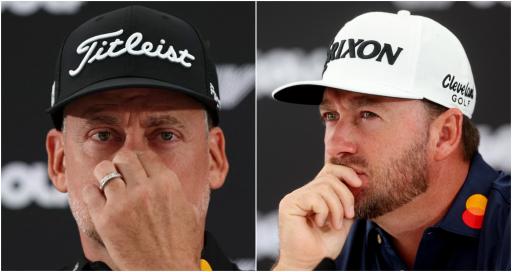 The LIV Golf versus PGA Tour battle took another twist after reports emerged that the DP World Tour are planning on telling the Saudi rebels they are not welcome at the Genesis Scottish Open.

According to a report in the Observer, the Scottish Open, which is co-sanctioned by the PGA Tour and the DP World Tour, will not allow the LIV Golf players to compete.

The tournament, with an absolutely stacked field, begins on 7 July at North Berwick’s Renaissance Club. It will act as part of the build up to the landmark 150th Open at St Andrews.

The inaugural event of the LIV Golf Series, which has a total prize purse of $255million, saw Charl Schwartzel take home the $4million top prize and another $750,000 for being on the winning team.

Approximately 30 minutes after that tournament began the PGA Tour’s commissioner, Jay Monahan, sent a memo to the membership confirming that those rebels were currently suspended.

This action was aways expected because the PGA Tour claim that the players who have turned their backs on them – which include Bryson DeChambeau and Phil Mickelson - are in breach of their regulations.

Ian Poulter has pledged to appeal his ban, saying he does not believe he has done anything wrong.

The DP World Tour have been silent in this whole saga so far. There have been reports they could forge links with Greg Norman’s LIV Golf. But this reported action would strengthen their links with the PGA Tour.

The Genesis Scottish Open boasts a prize purse of $8million and offers ranking points on the DP World Tour’s Race to Dubai order of merit and offers FedEx Cup points.

Scottie Scheffler, Colin Morikawa, Jon Rahm and Justin Thomas are all in the field.

If this report is true, it would come as a bitter blow to the current DP World Tour members and LIV Golf players Poulter, Graeme McDowell, Martin Kaymer, Lee Westwood and Sergio Garcia.

Those players have not resigned from the European circuit and were reportedly hoping to continue to play in DP World Tour events to gain ranking points to qualify for the majors and not diminish their chances of future Ryder Cup involvement as players or captains.

The PGA Tour are reportedly holding a board meeting next week. LIV Golf are also reportedly announcing more PGA Tour players who have committed to their mega money series next week as well.

DP World Tour chief executive Keith Pelley sent a memo to their members last week promising to outline their stance on the issue, according to a report in The Telegraph.

Next page: Dustin Johnson has one small regret about LIV Golf