Graeme McDowell vocalised his support for the LIV Golf Invitational Series when responding to a fan on Twitter who slammed the rebel tour. 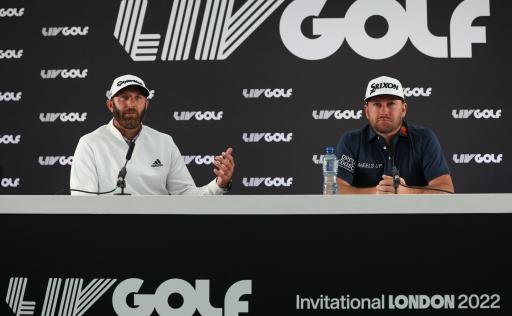 Former US Open champion and vocal LIV Golf rebel Graeme McDowell thinks the breakaway series will take off once the "smear campaign" is over.

McDowell gave a strongly-worded response to a damning verdict about the new tour given by a golf fan on Twitter. "Nobody is going to watch a washed-up group of money-hungry old men play an exhibition," the fan said.

"Watch this space. It will be a compelling field in no time. There is room for the sport for this product. Once the smear campaign dies down and the golf takes over, we will see," McDowell responded in support of LIV Golf.

During the series' inaugural event at Centurion Golf Club last week, McDowell fielded difficult questions about the morality of accepting large sums of money to play on a tour bankrolled by the Public Investment Fund, the sovereign wealth fund of Saudi Arabia.

By labelling the media's quest to get answers as a "smear campaign," McDowell reinforced the justification of his decision to play despite the poor human rights record of Saudi Arabia.

Related: US Open: Rory McIlroy has "one of toughest days" in third round in Brookline

Watch this space. It will be a compelling field in no time. There is room for the sport for this product. Once the smear campaign dies down and the golf takes over, we will see. https://t.co/gpETU0cnLq

The 42-year-old from Portrush has resigned from the PGA Tour and he has jeopardised his chances of playing on the DP World Tour and playing for/captaining the European Ryder Cup side.

Equipment Reviews
Golf Betting Tips: Sam Burns to secure fourth win of season at Travelers?
Golf Betting Tips: Could Rory McIlroy FINALLY WIN fifth major at US Open?
"I mean, listen, I mentioned it earlier. This has been incredibly polarizing. I think we all agree up here, take the Khashoggi situation; we all agree that's reprehensible. Nobody is going to argue that fact," McDowell said during his press conference in Hertfordshire on June 7.
"But we are golfers. Speaking personally, I really feel like golf is a force of good in the world. I just try to be a great role model to kids. I know what the game of golf has taught me. I love using the game of golf as something to kind of help grow around the world.
"That's pretty much what we've been for the last 20 years, being role models for kids and try to use this game, like I say, as a force of good really.
"We are not politicians. I know you guys hate that expression, but we are really not, unfortunately. We are professional golfers. If Saudi Arabia wanted to use the game of golf as a way for them to get to where they want to be and they have the resources to accelerate that experience.
"I think we are proud to help them on that journey using the game of golf and the abilities that we have to help grow the sport and take them to where they want to be."
Click to subscribe
Never miss a video from

Next Page: US Open: Jon Rahm has no regrets over 18th-hole double-bogey in third round