Justin Thomas, Collin Morikawa, Jon Rahm and Lexi Thompson will feature in The Slime Cup and it got golf fans laughing. 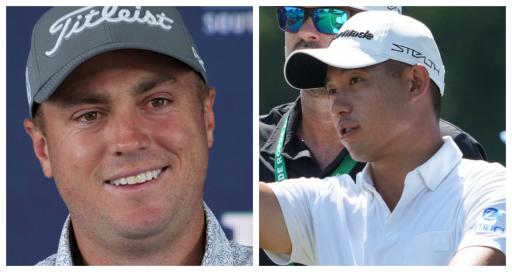 The format is similar to the made-for-TV golf franchise The Match. The hour-long special will feature four teams as they compete on the "Nick-ified" golf course to reach the final.

The final will be inside the iconic Rose Bowl stadium in California. The special will be broadcast on June 25 at 8pm.

Challenges that Thomas and co. will have to put up with include one-of-a-kind tee boxes, far-out fairways and greens and physical challenges. There is, of course, a whole load of slime.

Related: Here is everything you need to know about the new LIV Golf Invitational Series

The final hole is called "The Unfairway" and the winner will win the Nickelodeon Slime Cup, a Nick orange blazer and the honour of getting slimed.

The format will see teams compete in a two-round tournament, with holes inspired by fan-favourite Nickelodeon shows.

The news prompted some golf fans to joke that the field is better than the list of confirmed participants for the forthcoming Saudi-backed LIV Golf Invitational Series at Centurion Club.

Nickelodeon is putting on a golf competition called the Slime Cup and I am jacked up about it pic.twitter.com/GX0y5zHv1B

Kuch gonna backdoor top 10 the hell outta of this thing

Wait just a minute. Are the players requesting a release from the tour to compete in this event? How do we know that Norman isn't involved in this somehow?

Will they be banned from the PGA tour ?

They stole the LIV format.

This isn’t the breakaway tour I was expecting today…

Thought this was the LIV roster for a second!