Jon Rahm spoke to the media about his famous forced withdrawal last season at Memorial due a COVID-19 result when leading. 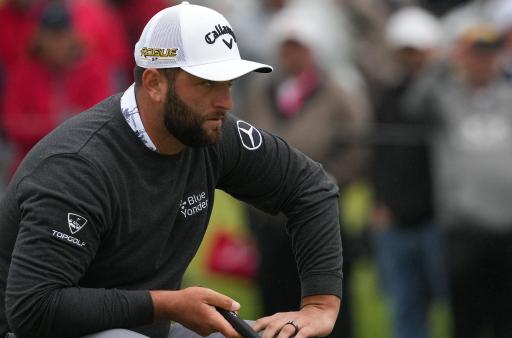 Former World No.1 Jon Rahm joked that it was nice to be allowed back into the clubhouse at Muirfield Village and he was mad “for about 10 minutes” after a COVID-19 nightmare last year.

Rahm was forced to withdraw from the Memorial on the PGA Tour last season after 54 holes and it was all the more frustrating for the Spaniard as he had forged a record six-shot lead at Jack’s place.

Of course, only two weeks later he went on to win his maiden major at the U.S. Open at Torrey Pines but it had a dramatic effect on his season overall.

Patrick Cantlay went onto win the tournament in a playoff over Collin Morikawa which was vital in the American winning both the player of the year and the FedEx Cup.

Now Rahm reflects that the most important thing was that he – and his family – are healthy. He even watched the final day broadcast.

He even revealed that moments after he was forced to withdraw, he was laughing and joking with his caddie. The pair even ordered Muirfield Village’s world-famous milkshakes.

Rahm was asked about what it was like going from an extreme low at Memorial to clinching that incredible victory at Torrey Pines where he was draining putts from everywhere down the stretch.

“I mean, it wasn't really a low, though,” Rahm said. “Yes, I walked off the course, I was told I couldn't play, and I was mad for about 10 minutes, right.

“I allowed myself to be upset. But instantly my switched flipped and I called my wife and I made sure that she was okay and my son was okay.

“Once I knew they were okay, I was in my little trailer, that little COVID hut we had, and me and my caddie were laughing.

“We ordered milkshakes and we were laughing at the funny part of everything, right. I mean, the fact that that happened; that I had a six-shot lead and it's gone, I can't even play, right. I mean, it's just -- the irony of it all kind of made us laugh.

“But at that moment, I chose to just remember how good I had played. I had played really good golf all year last season but it was the first time everything was clicking, and that was right before the thick of the season.

“So, I felt nothing but comfortable and confident for the summer. And really, I didn't let it slow me down and I played great golf the rest of the summer up to The Ryder Cup.

“I chose to just stay in the positive of things. And when I got home and I was dealing with COVID, I still stayed hopeful.

“All the hard work I've done the previous months since I switched to Callaway, it doesn't just go like that, right.”

He added: “So I was confident when I stepped up at Torrey that I could get it done, and that's what I'm saying, it wasn't really a low.

“Besides the worrying part about the disease, obviously I consider myself extremely lucky of how everything came out. Nobody was severely ill.

“Nobody had anything to really deal with that was dramatic.

“I've heard stories of people that get in the ICUs and have effects afterwards and it takes them months to recover, and we didn't have to deal with any of that. So, in that sense I was extremely lucky.”

Rahm was asked what he would tell himself now about that moment.

He told the media: “Nothing. Nothing, really. Well, I mean, I would probably -- I wouldn't want to jinx myself, but I would tell myself in a second I got a little frustrated, "Don't worry, you're going to win the U.S. Open."

“But besides that, nothing really. I mean, I watched it with a lot of grace. I was having fun. I kind of tuned in looking to see how close they got to 18-under which is where I was at. Obviously Sunday was a windy day and it was a tough one.

“The only thing I've said in the past don't give me the win, that's fine.

“But I am very comfortable I was going to be top 10, so at least give me a Top-10 for the career stats, not a WD because I've never withdrawn of a tournament as a pro once I started, and I hate that.

“So at the least the PGA Tour, if they are listening, just give me the top-10, you now. I think I would have shot 85 that day.”