Matt Fitzpatrick is following in Tiger Woods' footsteps and wants to create a legacy by winning on the PGA Tour and at major tournaments. 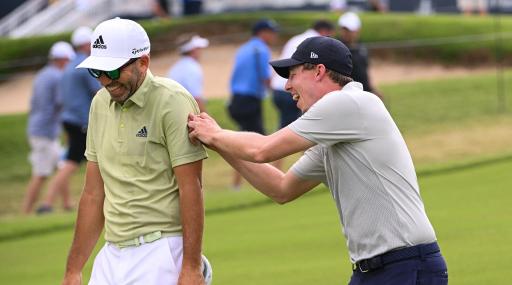 Matt Fitzpatrick said he couldn't have cared less about the paycheck he received at the US PGA Championship following his disappointing final-round display.

Fitzpatrick made this comment at a press conference on Tuesday ahead of the Memorial Tournament, referring to the financial lure of the LIV Golf Invitational Series.

The World No.15 is enjoying his best season on the PGA Tour to date, recording six top-10 finishes in 12 events which include that tied fifth finish at Southern Hills.

Much like many of the top golfers on the PGA Tour, the LIV Golf Invitational Series doesn't interest the Englishman as he looks for his first win in America.

"Tiger made a great point at the PGA the other day in his press conference. He's there to create legacies and to win tournaments and to win majors, and that's kind of - that's definitely why I'm here," Fitzpatrick said on Tuesday.

"I'll be honest, some tournaments where I'm maybe not necessarily in it, and I can't win, then I do think, oh, you know, at least on the bright side I've made this much this week after the tournament's over.

"I came away from the US PGA and literally couldn't care less about how much I made that week. I was just gutted that I didn't win. I had a chance and I didn't take it, and that said a lot to myself about myself that that's all I'm bothered about out here.

"You want to have records, I want to win tournaments, and for me, that's why for now, LIV Golf doesn't interest me. In five years, if all of a sudden that becomes the main tour, then obviously you rethink your options.

"But for now I'm out here wanting to make sure I've given myself the best chance of winning tournaments, winning majors and going about my career like that."

Four days ago, the golf world anticipated the announcement of the field for the first LIV Golf Invitational Series event at Centurion Golf Club on June 9, but it still hasn't arrived.

Some of Fitzpatrick's fellow Europeans such as Lee Westwood, Richard Bland, Sergio Garcia, Ian Poulter and Martin Kaymer have been rumoured to have shown interest in the tour commissioned by Greg Norman.

Next Page: WATCH: Golfer performs amazing trick shot including FLOP and a BOMB!