WATCH: Jumpy Dustin Johnson DID NOT like the thunder at LIV Golf Bangkok

Dustin Johnson appeared a little bit jumpy as the final round of the LIV Golf Invitational in Bangkok was delayed due to severe weather in Thailand. 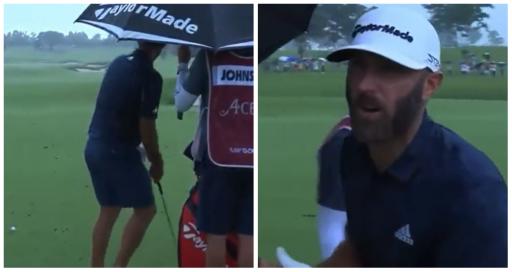 Dustin Johnson appeared a little bit jumpy at the sound of thunder during the final round of LIV Golf Bangkok.

The final round of the 54-hole, shotgun start tournament - played at Stonehill in the Pathum Thani province of Thailand - was delayed due to severe weather.

Johnson - who recently may have got himself into hot water with his wife Paulina Gretzky at a LIV Golf press conference - was getting ready to play his approach shot and it's clear the conditions were absolutely terrible.

In the clip David Feherty, who even called BS on some LIV players' claims, explains that it will be up to the tournament officials over how to proceed.

DJ then desperately asks if tournament officials have blown the horn to signal to the players to get off the course.

The weather came in quick, check out DJ’s reaction to the thunder! He needs a thunder buddy pic.twitter.com/mzIdZXpUBO

As @Flushingitgolf rightly points out, perhaps DJ does indeed need to have a thunder buddy!

As the players took shelter, Bubba Watson tried to keep things light for the viewers with some interviews.

Lopez-Chacarra picked up $4m for his first victory since turning professional four months ago.

There are only two events left in LIV Golf's inaugural season. They will head to Jeddah next at Royal Greens Golf & Country Club over October 14-16 before heading to Miami to play the season-ending Tour Championship at Trump Doral over October 28-30.