David Feherty on LIV decision: "Grow the game? Bull****, they paid me a lot"

David Feherty has given his first interview where he discussed his reasons for joining the LIV Golf Invitational Series as the lead analyst. 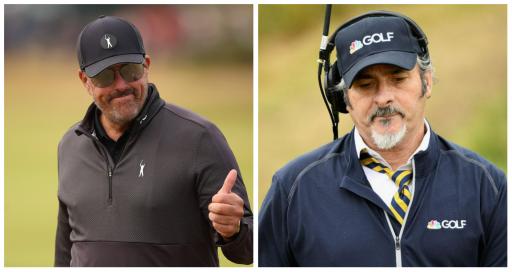 David Feherty has given an interview with The Blade in which he was brutally honest about his decision to join the LIV Golf Invitational Series.

Feherty, 63, turned heads when he decided to join the Saudi-backed circuit. He was announced as the lead anchor via Phil Mickelson from the jungle.

His first tournament was the LIV Golf event at Trump National in Bedminster, New Jersey, which was won by axed Ryder Cup captain Henrik Stenson.

If we're being brutally honest, there are a number of hilarious, questionable reasons offered by some players in deciding to join LIV.

Oh, and how many times have we heard the famous "grow the game" line. Whether it's from Graeme McDowell or from Patrick Reed. Just stop!

Even Feherty, thinks this is complete and utter nonsense.

So why did Feherty join LIV Golf?

"Money," he told Gary Koch in a fundraiser recently. Apparently the crowd stood up and cheered?!

Okay, well, full marks for honesty there then!

Feherty also drew criticism because his charity, the Troops First Foundation, aids military members who served in Iraq and Afghanistan.

Some LIV players have been heckled. Protesters have been on site at tournaments. They have vowed not to stop.

In his first comments justifying why he has joined LIV, he did not state that he believed the format was revolutionary.

LIV Golf plays tournaments with fields limited of 48 players, with shotgun starts and guaranteed prize money for every competitor.

Feherty claimed there were other reasons too for his decision to join LIV.

"[It was] an opportunity to be myself again," he said.

"It's become more and more difficult, especially in sports broadcasting, to have any kind of character.

"But I have become more and more guarded over the last few years.

"There are people waiting around every corner hoping to be offended by something. F*** those people.

"Our lives are being shaped by small groups of mean-spirited people who have no sense of humour.

"We're in danger of losing our national sense of humour because of this."

He also spoke of doing business with Saudi Arabia.

"You can point to various countries throughout the world. I wouldn't want to behave like that, but wherever golf is, good happens, and I'm hoping this will do the same thing. [LIV] has said its going to donate $100million to area charities."