Dustin Johnson was asked an awkward question that involved his wife Paulina Gretzky after the second round of LIV Golf Chicago. 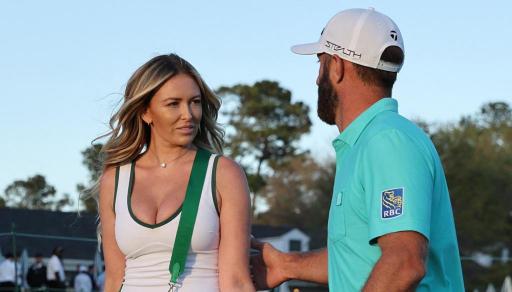 Dustin Johnson may have landed himself in hot water with his wife Paulina Gretzky when he was asked this question at LIV Golf Chicago.

Johnson, 38, was in scintillating form once again at Rich Harvest Farms. After two rounds, the American - who was one of the first players to upset the status quo in golf by resigning his PGA Tour membership - was set for a battle with Cameron Smith in the third and final round.

The American, who was on 59-watch in the first round this week, joined the media after his second round shortly after Brooks Koepka chided the PGA Tour about caddies, when he was asked this non-golf related question.

DJ's love of fishing is well-known. According to sources close to Johnson, he's always wanted to finish up his golf career in his mid-40s and simply hang out with his kids, Paulina, and fish in his spare time.

Related: Paulina Gretzky dresses for the occasion at The Masters

Here's the full exchange from the press conference...

Q. As an avid fisherman, I always wanted to ask you, if you were stranded on a island for the rest of your life, would you rather take your fishing pole or Paulina if you had one choice.

Yikes! Well, that's quite an exchange...

This wasn't the time a player simply couldn't answer an awkward question this week. Aussie Smith was asked how many of Rory McIlroy's tears he could fit into the Claret Jug after winning The Open.

It followed on from The Players champion reacting to a meme of the Northern Irishman during a practice round earlier in the week.

He won the last event in Boston with a 40-foot bomb for eagle in a playoff against Anirban Lahiri and Joaquin Niemann.

He's also been smashing it as the captain of the 4Aces GC side, which comprises of Pat Perez, Talor Gooch and Patrick Reed.

After four events, he's taken home £8.6m in on-course earnings with LIV Golf. Rumour has it that he also got a fair chunk of change for signing with LIV in the first place.

That oughta soften the blow a little bit for Paulina...