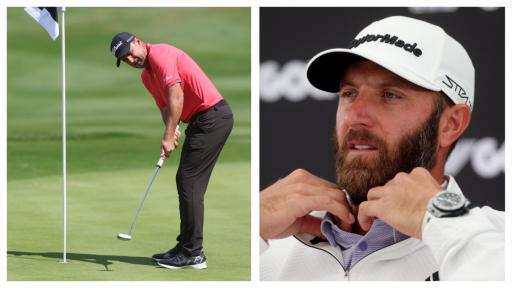 Sky Sports Golf on-course commentator Wayne Riley believes many more star PGA Tour names will make the move to LIV Golf over the coming months. He also fears for the existence of the DP World Tour and even labelled their players as "not that good".

Dustin Johnson has sent shock waves through the sport this week after not only participating in the LIV Golf opener at Centurion Club, but also resigning his PGA Tour membership having won 24 times on the circuit.

Johnson, a former World No.1 and a two-time major champion, has been offered in the region of $150 million in appearance fees to play in Greg Norman's controversial Saudi-backed golf league.

Phil Mickelson has also accepted a huge $200 million offer to play, but he still has intentions to play PGA Tour events.

Other players breaking away from the PGA Tour include Sergio Garcia, Louis Oosthuizen, Charl Schwartzel, Branden Grace and Kevin Na.

Riley, who was speaking on Sky Sports News this afternoon, believes many other players will soon follow their lead.

Got to be fit to talk golf

Wayne Riley beats me here in the gym, but who remembers when and where “Radar” beat me at golf? pic.twitter.com/0qH18Yww5R

"I see it going forward, I see a lot of golfers joining this, I really do," said Riley, who won twice on the European Tour back in the mid 90s.

"I see golfers that say they aren't going to join, joining this. I hope I'm wrong, but I don't think I am.

"It's one of those situations. This is my opinion.

"I see this [LIV Golf] being big. Three days, no cut. You know that if you buy a ticket all the players you wanted to see will be there.

"The shotgun start, I don't know about that, but there is music and bars everywhere, and there is nothing to dislike.

"I think it has a big future, this is just my opinion."

With the emergence of LIV Golf and a seemingly endless flow of funds by the Saudi Arabian Public Investment Fund there to attract the game's best players, Riley now fears for the existence of the DP World Tour (formerly the European Tour) despite its recent alliance with the PGA Tour.

"I believe The Shark, Greg Norman, wants to get this to about 14 events and then you can live with the PGA Tour, and maybe the DP World Tour will get together to build another Tour.

"I do fear for the DP World Tour though, I hope I'm wrong. I just think playing for $2 million dollars average a week with the fields they have, I think Keith Pelley is a genius to be perfectly honest. I watch it from here in the States, and the fields are not strong.

"The guys on the DP World Tour are probably screaming down the television to me right now, but I'm sorry guys, you aren't that good. The world wants to see the best players play golf and we've always wanted to see that."

Next Page: Golf reporter shut down during LIV Golf press conference, security has to get involved