Former professional golfer Ken Brown has published a photograph of his first contract with Dunlop in 1975 which shows just how crazy the LIV Golf deals are. 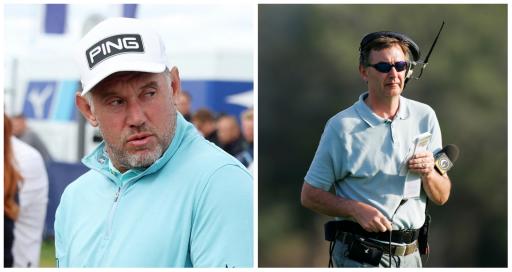 Ken Brown joined the European Tour back in 1975 and it's fair to say his first contract with Dunlop looked a bit different than some of the LIV Golf players.

Brown, 65, took to social media to reveal just how difficult it was to get your hands on golf balls back in the day.

They were in such scarce supply that apparently Brown was only permitted six Dunlop golf balls per month.

Apparently, his Dunlop tour rep Jimmy Bagg would only permit three more golf balls if you made the cut.

"He was like a squirrel," the Scot posted. "Just balls were his nuts."

Brown also took a quip at LIV Golf by suggesting: "We really knew how to LIV in those days!"

Oh, and did we mention that the fact that he was also only given three balls per month in the off season!

Just think of how absurd such an agreement would be these days!?

I'm sorry Brooksy, but you've had your quota...

My Dunlop ball contract from 1975 when I first joined the European Tour.

Now I know why I had a short backswing!

We really knew how to LIV in those days! . pic.twitter.com/WARktEsPAS

Jimmy Bagg was the Dunlop rep on tour back then you got 3 balls for the first two round .. 3 more it you made the cut. He was like a squirrel Just balls were his nuts.

His first win was the 1978 Carroll's Irish Open, beating Seve Ballesteros and John O'Leary by a single stroke.

His other wins included the Dutch Open, Glasgow Open and the Four Stars National Pro-Celebrity.

He finished in the top-10 of the European Tour Order of Merit on four occasions.

Brown now spends his time as a TV golf commentator and analyst for the BBC and Fox Sports.

Next page: Casey wants European Tour to answer these questions about LIV