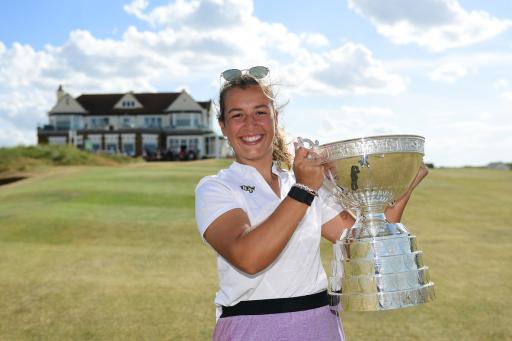 Jess Baker produced an impressive display to claim the biggest title of her career and win the 119th Women’s Amateur Championship at Hunstanton.

The Englishwoman, 19, shone at the Norfolk links to achieve a 4&3 success against Sweden’s Louise Rydqvist in the 36-hole final.

Having defeated in-form duo Emilie Alba Paltrinieri and Hannah Darling on Friday, Baker continued her form to come out on top from a field of 144 players representing 24 countries this week.

Baker, who attends the University of Central Florida in Orlando, became the fifth English winner of the coveted championship in the last 13 years. Having had to hole a 25-foot putt just to reach the matchplay stages, her triumph was even more noteworthy.

Related: Xander Schauffele leads by one going into final round of Travelers

Coached by Andy Paisley at Hexham Golf Club, Baker won the closing four holes in a row to lead three up at lunch after mistakes from Rydqvist, who is ranked 143rd on WAGR.

It was a tight contest in the afternoon but after the lead was extended to five up through 28 holes, Rydqvist was unable to make a comeback as Baker eclipsed her run to the quarter-finals last year.

"It’s an amazing feeling, just incredible. I can't believe it. I'm absolutely stunned but I'm just so happy. I worked really, really hard to get here and it's just such a satisfying feeling," said Baker.

"Yesterday, in particular, was an absolute dream day. I holed everything and hit it amazing. It all came together yesterday to give me this opportunity.

"So, yeah, it's been a long time coming and I'm just really proud of myself. I didn't do anything special today. I just got ahead and then kept the lead. It was about the person making the least mistakes today."