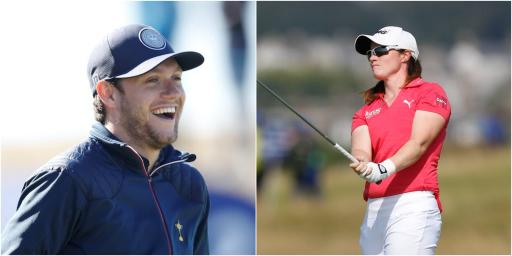 Leona Maguire admitted her historic win at the LPGA Drive On Championship was 17 years in the making and hoped she can inspire more girls to get involved in the sport.

The Cavan native became the first Irish golfer to win a title on the LPGA Tour by finishing at 18-under par at the Crown Colony Golf & Country Club.

Her final round of five-under 67 in the 54-hole competition saw her finish three strokes ahead of LPGA heavyweight Lexi Thompson to secure her maiden title.

Maguire, 27, who starred in the Solheim Cup as a rookie when she managed to claim four-and-a-half points for Catriona Matthew's Europe in a 15-13 victory, had gone into the final round tied for the lead. But a blistering back nine saw her cruise to victory.

She said by the green:  "It is a bit surreal, it has been a long time coming.

"I was feeling really calm today, I wasn't nervous and just went about my business. I felt like the course played tougher but I hit some nice iron shots that came in handy.

"I have a lot of people to thank and it's been a long road, but it's probably more relief than anything else."

Maguire entered the professional game in 2018 after a simply stunning collegiate career at Duke University.

As an amateur Maguire was a three-time Curtis Cup player with Great Britain & Ireland and also played at the 2016 Rio Olympics and the Tokyo Olympics four years later.

In 2017, she claimed the Ladies British Amateur title and was the top of the amateur rankings for 135 weeks.

Pat Hurst, the United States' Solheim Cup captain, spoke of how Maguire was one they would have to fear for many, many years.

With this win, Maguire now has the golf world truly at her feet and it's hard to see why Nelly Korda et al shouldn't be fearing the Irishwoman.

One person watching on with keen interest was Niall Horan. Horan is the founder and owner of Modest!, who represent Maguire.

Asked about Horan at her winner's press conference, Maguire said:  "Yeah, he's been there right from when I turned pro. Been a huge help in my management company. Yeah, Mark and Niall have been there since the start. My sister Lisa works with them as well, so it's nice to have people in the background looking out for my best interests.

"Niall has been trying to grow the game in Ireland in young girls, and hopefully this win today can help that as well?"