Minjee Lee's second-round score of 66 fired her up the leaderboard to share the top spot with Mina Harigae on day two of the Women's US Open at Pine Needles. 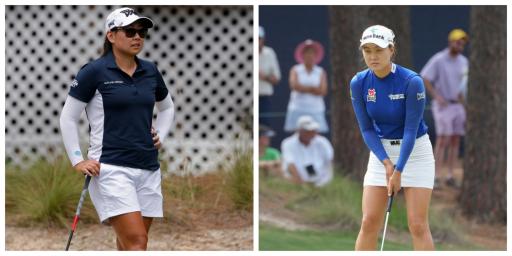 Minjee Lee's scintillating 66 in the second round of the Women's US Open put her at the top of the leaderboard alongside the American Mina Harigae.

Lee made six birdies and just one bogey on the par-5 14th hole on Friday at Pine Needles. Her score of 5-under-par on the day was only bettered by Hyejin Choi who fired a 64.

The 2021 Evian Championship winner won the Cognizant Founders Cup last month which was her seventh win on the LPGA Tour.

She shares the lead on 9-under-par with Harigae who, despite making three bogeys in the second round in North Carolina, carded a 69 to contend for her first major title.

The 32-year-old's best finish at the Women's US Open is tied for 28th and although she has seven wins as a professional, she is still looking for a breakthrough victory on the LPGA Tour.

Related: Have PXG and Patrick Reed already parted ways on the PGA Tour?

Back-to-back birdies and @minjeegolf is T3

Watch the @uswomensopen now on @USA_Network!

"I'm not sure how the conditions are going to change and what time I'm playing, but I've been taking one shot at a time," Lee said on Friday.

"The golf course can really catch up to you quickly, so just trying to take whatever I have in front of me as I go and just try to take - whenever I have a birdie opportunity, I try to take advantage of that."

"Today was fun, but stressful for sure. A little more stressful today for sure, and things got a little shaky there, but I was really happy with the way I hung in there and made some good birdies coming in," Harigae said.

The pair are two shots ahead of Choi and Anna Nordqvist. The three-time major winning Swede has carded rounds of 67 and 68 so far to sit on 7-under-par for the week.

World No.2 Nelly Korda, playing for the first time since receiving blood clot surgery, has recorded scores of 70 and 69 to sit six shots behind on 3-under-par.

Next Page: Hideki Matsuyama DISQUALIFIED from Memorial after marks on 3-wood