Annika Sorenstam on Wie West: "Many people thought she would do more" 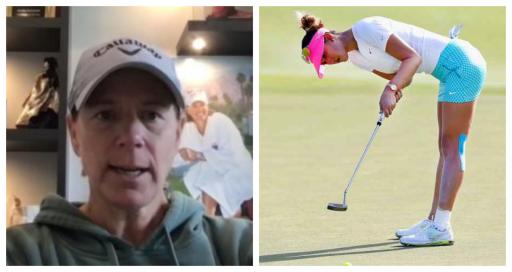 Wie West, 32, has announced that she will be stepping away from the LPGA Tour and this week's major could likely be the penultimate event of her astonishing career that began as a teenager.

The American has said that she will also play the U.S. Women's Open in 2023 at Pebble Beach but then will step away from the game to pursue other interests.

"It was kind of bittersweet always to announce that, but it's something that I've been thinking about for a while," said Wie West.

Wie West has only won one major during her career. That came in 2014 at this championship.

Golf legend Sorenstam, who won the 2021 U.S. Senior Women's Open, is returning to the U.S. Women's Open for the first time since 2008.

Sorenstam was asked what career she thought Wie West was going to have when she first played with her at the age of 13.

In many ways, it is exceedingly appropriate that @MichelleWieWest has decided to step away from competitive golf at 32.

Everything in her life has happened on a quickened timeline.

And the USGA has played a crucial role in this remarkable journey, @ronsirak writes.

"I played with her in the last group at, what's it called now, The Chevron Championship. It was Dinah Shore at the time.

"I played with her in the last group. To have an amateur, a teenager at that time, that was really impressive. She hit the ball a long ways.

"I remember her swing was really very powerful, especially her wedge game. She put a lot of spin on the ball, and being 6-foot something like that, I was, like, wow, this girl has got it.

"Like I said, she still had a great career in many ways.

"Maybe other people thought she would do more, but it's hard to win out here. She won a U.S. Open, as you know, and other events. She's been great for the game."

Does Sorenstam, 51, think injuries played a big part in Wie West's decision to step away?

She said: "I really don't know. She has a lot of great things going for her, being a mother and a wife and all the other businesses.

"I think there's a lot on the plate, which I can kind of relate to. I know what it's like with other interests. It's a fun time for her."