Australian star Minjee Lee held off the challenge of Mina Harigae to win her second major championship by four shots at Pine Needles. 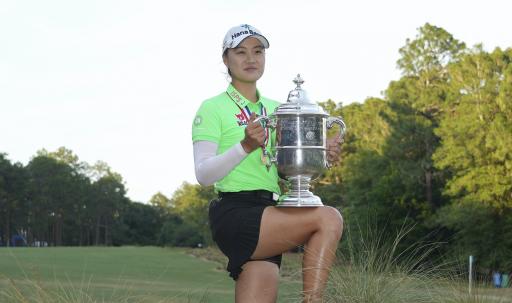 Lee's final round score of 71 was enough to finish on 13-under-par in North Carolina and well clear of Mina Harigae in outright second place.

Following up on her win at the Evian Championship in 2021, Lee won £1.44 million, picked up her eighth win on the LPGA Tour and moved to the top spot in the Race to the CME Globe.

The World No.4 set the 72-hole scoring record of 271 at the event and became the first Aussie to win the Women's US Open since Karrie Webb in 2001.

This one hits hard. Tears in my eyes. So so proud. Just a kid from Perth. Two major wins to her name now Inspiring #USWomensOpen pic.twitter.com/HwvQzi2f19

"It's just super, super special and just a great honour. It's been my dream since I was a little girl. It's the one that I always wanted to win on - now I've done it, and just feels amazing."

The 26-year-old began the day three shots in front and she didn't look back with two birdies in her first two holes. She gave those two shots back with bogeys on the 5th and 7th holes, but still held a four-shot advantage on 13-under.

The lead became five shots when Harigae bogeyed the 11th hole and it became even wider when Lee rolled in a birdie at the 12th hole.

Despite late bogeys on the 16th and 18th holes, Lee sealed the deal with rounds of 67, 66, 67 and 71. Harigae finished in outright second while Hyejin Choi was third on 7-under.

Nelly Korda returned to action for the first time since having blood clot surgery and she carded a final-round score of 73 to finish in a tie for eighth with Leona Maguire and Megan Khang.

Next Page: Kalle Samooja: What's in the bag of the new DP World Tour winner?