LIV Golf Investments CEO Greg Norman claims Jack Nicklaus is a "hypocrite" ahead of a huge week in golf. 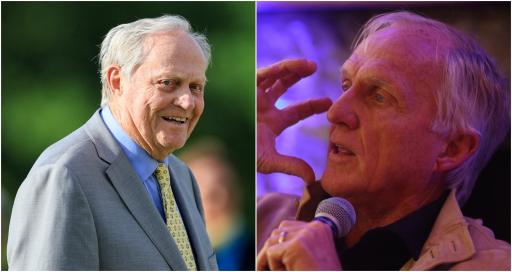 Greg Norman has described legendary golfer Jack Nicklaus as a "hypocrite" ahead of a huge week in golf.

LIV Golf Investments CEO Norman, 72, has claimed that Nicklaus was in favour of the Saudi-backed league having previously voiced his support for the venture.

The Golden Bear previously said that he turned down an offer north of $100million for the role which is now occupied by The Great White Shark.

Norman told the Washington Post: "One hundred per cent truth? Jack's a hypocrite. When he came out with those comments, I'm thinking: Jack must have a short memory."

He added: "Quote-unquote, he said: 'This is good for our game. If it's good for the game of golf, it's good by me.'

"So you want the facts? You've got the facts. Know what you said before you open your mouth."

Nicklaus spoke to the media last week ahead of the Memorial at Muirfield Village. He brushed away questions quickly when asked about the Saudi-backed LIV Golf Investment Invitational Series.

The golf icon is also being sued by Nicklaus Companies.

The lawsuit alleges tortious interference, breach of contract and breach of judiciary duty against Nicklaus and his company GBI Investors.

The complaint alleges that Nicklaus, 82, diverted opportunities away from Nicklaus Companies for his personal benefit.

Documents submitted to the court show that other alleged violations in the lawsuit include Nicklaus Companies accusing Nicklaus of improperly negotiating with officers of Golf Saudi.

The 18-time major champion was asked about his dealings with LIV Golf last Thursday.

He said: "Well, they [LIV Golf] obviously called me. And we've had a contract on a golf course in Saudi Arabia for over a couple of years. Essentially the same group.

"So when they called Jackie -- my son Jackie organized the meeting, and they came into the Bear's Club.

"We met a couple of guys. John Rees and Paul Stringer from the Nicklaus companies were there because we were doing the golf course, and they proposed this thing to me.

"You know, I did it out of courtesy to them because we're doing a golf course for them. I've got zero interest in wanting to do something like that.

"My allegiance is there and it's going to stay there."

Nicklaus said if the LIV Golf Invitational Series "grows the game" and "spreads the game" then it was fine.

He added: "But I think we've had enough of that. Let's talk about the Memorial Tournament."

In the wake of the Post's report, a spokesperson for Nicklaus said he wished Norman well but reiterated his "unwavering support" for the PGA Tour.

The inaugral event of the LIV Golf Invitational Series begins on Thursday at Centurion Club in St Albans.

It is the first of eight events in a global series where each prize purse is $25million.

The winner will get $4million whilst whoever finishes last in each 54-hole tournament is guaranteed a payday of $120,000.

It is controversial because the league is funded by the Public Investment Fund, the sovereign wealth of Saudi Arabia.