Bubba Watson has been praised for his unbridled enthusiasm to the Solheim Cup. 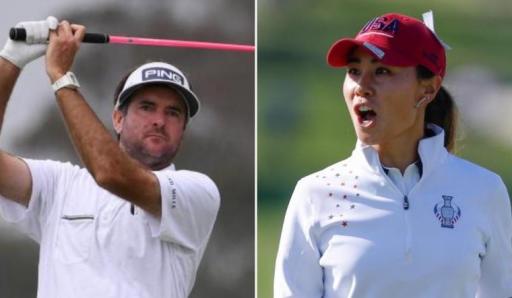 Bubba Watson has insisted his enthusiasm for the Solheim Cup is real.

Watson, 42, has been dubbed as Team USA's hype man for the biennial event.

He's been described as filling every role imaginable for the Americans.

From filling divots, to letting players use his mini-van.

He's also been on the team radios, chatting to players between holes and revving up his nation.

All week he's pushed the event on his social media channels.

On the first tee on Saturday, he joked to golf correspondent Amanda Balionis that the ladies hit more fairways than he does.

He told the media that, "the ladies have just as much talent, if not more than we do".

"The ladies have just as much talent, if not more than we do.”

Reasons why you should watch women's golf according to @SolheimCupUSA's hype man, @bubbawatson. @LPGA // @OnHerTurfpic.twitter.com/YvJh2VJA11

Watson reportedly approached captain Pat Hurst before he failed to qualify for the Tour Championship around a month ago.

RELATED: PEDERSON TO PLAY AGAINST USA CADDIE AND BOYFRIEND

He reportedly missed his wedding anniversary for this and certainly appears to be walking the walk.

"If I just tell everybody that we need to help ladies sports, or ladies golf, you can’t do it unless you go see for yourself,” said Watson. “You don’t know where the impact can be made.”

He has been outspoken about promoting all women's sport and has been an advocate for promoting the importance of mental health.

His wife Angie was a former professional basketball player.

One of the best ladies of the game of golf!! Thankful to have had the chance to meet @lauradaviesgolf!! #Legend #SolheimCup pic.twitter.com/lPxOxL7JxZ

The two-time Masters champion said: “The girls started to realize, this is real,” said Watson. “I’m not faking this. This is not for PR.”

Danielle Kang told the media: "You've just got to take advantage of the Masters champion, right?".

Team USA trail the Europeans 9-7 going into the singles.