This cameraman had the unenviable task of trying to capture fast player Nelly Korda's shot after Lydia Ko's approach. 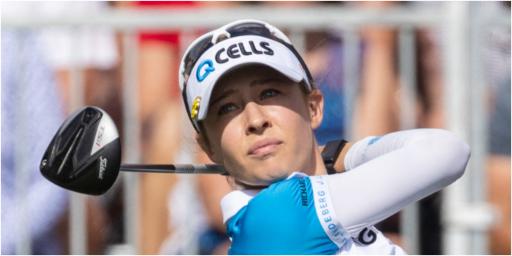 This cameraman showed true professionalism and athleticism to capture one of Nelly Korda's shots on the LPGA Tour.

It's probably never really picked up on just how much hard work goes into providing golf coverage for our entertainment.

It's heavy work for those who are on the course lugging around heavy equipment on professional golf tours around the world.

Which, we're sure, makes it all the more frustrating when their hard work is spoiled by adverts every two minutes.

This great clip was doing the rounds over the weekend going all the way back to the ANA Inspiration on the LPGA Tour last April.

Nelly Korda was in contention. Lydia Ko, too. Patty Tavatanakit eventually emerged as the winner with a two-stroke victory.

At the time, Ko sends her shot from the fairway into the heart of the green. Then Korda steps up.

If you weren't aware, Korda wastes absolutely no time when she plays. She's a step up and hit it kinda woman.

The only problem for the poor cameraman was that he was tasked with having to capture both Ko and Korda's shots.

Watch the clip below as he darts across the fairway, busting a gut so he can capture Korda's approach shot.

That is true, dedicated professionalism. Even Korda saw the funny side of it at the time.

Shoutout to this Golf Channel cameraman who absolutely BOOKED IT after Lydia Ko's shot to get to Nelly Korda in time for her shot. pic.twitter.com/vvhUeVrtth

Korda, the 23-year-old younger sister to Jessica Korda, had an unbelievable 2020-21 season.

She won an Olympic gold medal and six times on the LPGA Tour.

A new rivalry emerged as she battled Jin Young Ko for the player of the year title, with the latter eventually winning.

She met Tiger Woods for the first time at the PNC Championship and her reaction was just pure, undiluted joy.

Next page: Nelly Korda admits she hates the range