Brooks Koepka "not worried" about Bryson DeChambeau at The Masters

Brooks Koepka: "I'm only worried about me. Nobody else out here is going to make me go lift in the gym." 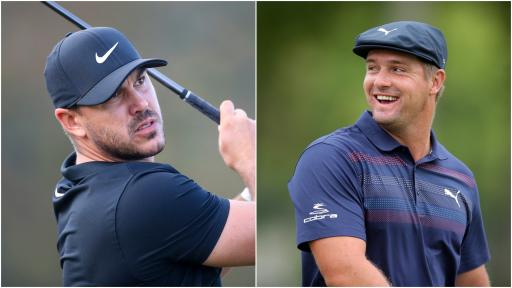 Brooks Koepka has insisted that Bryson DeChambeau's recent bulk-up hasn't made him question his own work ethic, either in the gym or on the golf course.

The two Americans have had a rather rocky relationship over the past few years and DeChambeau's recent transformation only added fuel to the fire.

Both players tend to play down any rumours of a feud, but the pair clearly don't have much time for one another, with Koepka recently saying in a Q&A "if you haven't got anything nice to say, then say nothing" when asked about DeChambeau.

DeChambeau is one of the hot favourites to take home the green jacket at The Masters this week and it's no surprise given his recent form, that saw him win his maiden major title at the US Open in September.

During practice rounds for the final major of the year, DeChambeau was making lightwork of Augusta and was using his new 48-inch driver to send bombs down the fairway.

Speaking to the media ahead of The Masters, four-time major champion Koepka was asked if DeChambeau has "surpassed" him in terms of workout effort.

Koepka was also asked on how much of an advantage it is for DeChambeau, being able to hit a 48-inch driver at Augusta National.

"Your misses become a little bit wider. I have no idea. If he wants to putt 48‑driver in, good for him. I just don't‑‑ I mean, it's going to be an advantage. Length is always an advantage. He's done a good job of working. He's worked his tail off to hit it that far."