Bryson DeChambeau disappoints AGAIN in first round of The Masters

Bryson DeChambeau hasn't had much joy at Augusta National in his career and he began with a 76 at The Masters on Thursday. 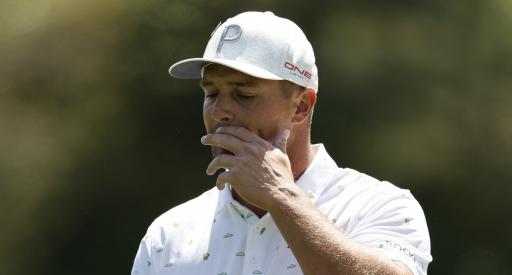 Is he still injured? Or is he just in bad form? Right now, Bryson DeChambeau is having a tough time on the PGA Tour and this showed in the first round of The Masters.

The former US Open champion's first nine holes were perfectly acceptable. After a birdie on the 3rd and a bogey on the 4th, he was playing fine on level par.

The back nine, the nine where the players arguably have more opportunities to boost their score, is where things unravelled for DeChambeau.

DeChambeau then bogeyed the 15th hole, found a birdie on the 16th hole but carded a disappointing round of 4-over-par with his fourth bogey on the final hole.

Related: Did Francesco Molinari hit the WORST SHOT of the week on day one at The Masters?

Although a younger Bryson finished in 21st place as the low amateur at The Masters in 2016, this still stands as his best finish at Augusta National.

In November 2020, the eight-time PGA Tour winner described the course down Magnolia Lane as a "par-67", referring to his power and being the biggest hitter on the circuit.

So far, his 'bomb and gouge' tactics haven't worked at the first major championship of the season. He only found seven of 14 fairways in the first round on Thursday.

This is DeChambeau's third appearance since his return from a wrist injury. He was eliminated in the group stages of the WGC Match Play and he missed the cut at the Valero Texas Open.

He has only played four times in 2022. His activity has been very low and as you can see by his current form, you would suspect he hasn't made a full recovery from his injury.

Next Page: WATCH: Bubba Watson has an ALMIGHTY STROP with mud ball at The Masters