Did Francesco Molinari hit the WORST SHOT of the week on day one at The Masters?

Francesco Molinari had a torrid time at The Masters on Thursday and this was personified by a very poor putt on the 2nd hole. 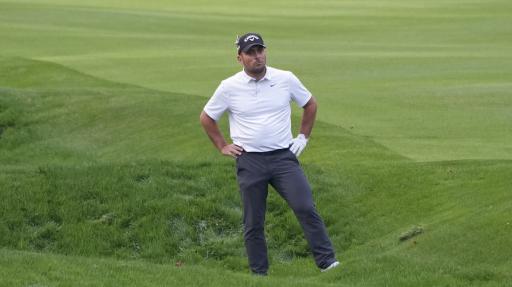 Francesco Molinari was, unfortunately, a shadow of his former self in the first round of The Masters and one shot, in particular, represented the state of his game.

Molinari managed to make a par on the 1st hole, but he made a mess of the second hole. He overshot the green with his third shot on this par-5 and he had a choice of whether to putt or chip.

The Italian opted for the putter but what followed is one of the worst putts we have seen from a top PGA Tour player in recent memory.

Molinari's putt didn't even make the putting surface, rolling just eight of the 13 yards that he had to the hole. With the crowd sitting behind him, this was a very embarrassing moment for the 39-year-old.

He went on to shoot a 6-over-par 78 which included six bogeys and a double-bogey. He now has an uphill task to make the cut at the event where he finished fifth in 2019.

It was this period when Molinari was in the form of his career. In 2018, he won the Quicken Loans National and his first major title at The Open Championship.

In the following season, he picked up his third PGA Tour title at the Arnold Palmer Invitational. He reached fifth in the world rankings and he won all five of his matches for Team Europe at the 2018 Ryder Cup.

But now, he has fallen to No.185 in the rankings and he has only made four top-10s since the start of last season. In nine events in 2022, he has missed three cuts.

Molinari is sat in a tie for 82nd place at The Masters and he has an uphill battle against missing another cut.

Next Page: Rory McIlroy: I don't care where I am on the leaderboard, I played well"