WATCH: Bubba Watson has an ALMIGHTY STROP with mud ball at The Masters!

Bubba Watson was absolutely furious when a mud ball took off into the Azaleas at The Masters at the par-5 13th. 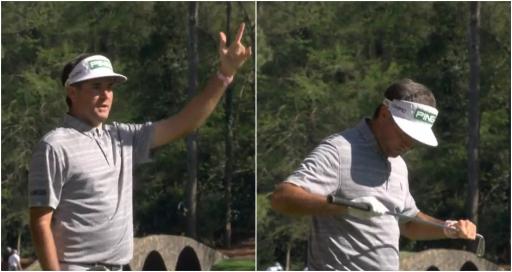 It's safe to say Bubba Watson and mud balls do not mix. But throw at mud ball into the equation at The Masters and it's not pretty.

Watson was absolutely furious with the way his ball "just took off" during his opening round on Thursday at Augusta National.

Watson took a solid pass at the golf ball and no sooner had the ball left the club face had Watson was seeing red with what unfolded.

"Mud! Are you kidding me?!" he shouted before turning away in disgust. The ball flies straight into the Azaleas. "Oh dear!" said Jim Nantz.

A perplexed Watson said: "It just took off that way! There's no freakin' way!" before looking like he was about to snap his club.

Watson, 43, then sarcastically adds: "I mean I guess I gotta lay up with a putter?!" before going to search for his muddy ball.

The left hander eventually managed to escape the hole with a solid par on his way to an opening round of 1-over par 73.

Bubba Watson was NOT happy when his wayward shot at the 13th hole ended up in the azaleas at Augusta!pic.twitter.com/23GFczGaRz