Why Phil Mickelson called Vijay Singh a "motherf-----" at 2005 Masters

Phil Mickelson was involved in heated exchange in the locker room with Vijay Singh at the 2005 Masters. 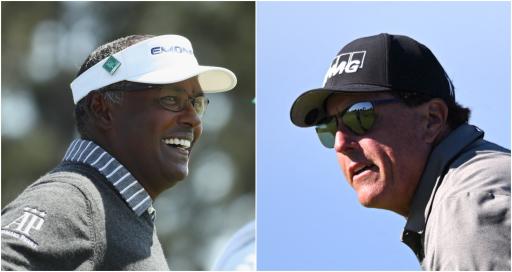 The 2005 Masters will forever be remembered for Tiger Woods' remarkable chip in but it's safe to say it was where Phil Mickelson's fractious relationship with former World No.1 Vijay Singh reached boiling point.

A few weeks before the major Singh did himself no favours with golf fans and cast himself in a perhaps unflattering light when he asked a tournament official to check on the legality of Woods' driver at Bay Hill.

At Augusta National that year, Singh was involved in more controversy. This time it was with his old foe Lefty as Singh complained that his spikes were leaving huge marks on the greens.

Singh called over a rules official at the 12th hole and Mickelson was informed of the complaint. Tiger's caddie Steve Williams this year told the Chasing Majors podcast that although Lefty's 8mm spikes were larger than usual, they were absolutely legal.

Will Nicholson, the then chair of Augusta National's competition committee told the media: "One of our officials talked to Phil to see if there was a burr on the side of one of his spikes. He very generously, as you know he would, said he would change them when he got in if there was a problem. There wasn't."

When Mickelson got back into the locker room things reportedly got extremely heated when he chose to confront 2000 Masters champion Singh.

Apparently - and take this with a pinch of salt - Lefty even asked Singh if he wanted to settle the issue outside.

Mickelson's on-the-record comments to the media painted a watered-down version of what had apparently transpired.

Mickelson said:"I was extremely distracted and would have appreciated if it would have been handled differently or after the round.

"After sitting in the locker room for a while, I heard Vijay talking to other players about it, and I confronted him.

"He expressed his concerns. I expressed my disappointment with the way it was handled."

Williams told the Chasing Majors podcast: "There's no love lost between those two, that's for sure."

Mickelson was absent from the 2022 Masters.

He informed Augusta National chairman Fred Ridley by text message earlier in March to say he was not participating.

Ridley poured cold water on suggestions that Mickelson was "disinvited" to the tournament at his press conference.

After getting the 86th Masters underway as an honorary starter, Gary Player defended Mickelson over recent comments that cast Mickelson in a less than impressive light.

Mickelson has said sorry for his comments and actions due to his association with Greg Norman and the Saudis but has apparently "gone dark" and was not responding to phone calls, according to Bryson DeChambeau.