Fred Ridley on Dude Perfect: "My first reaction was who are these guys?!"

Fred Ridley, the chairman of Augusta National, has given his thinking behind allowing Bryson DeChambeau to film with Dude Perfect. 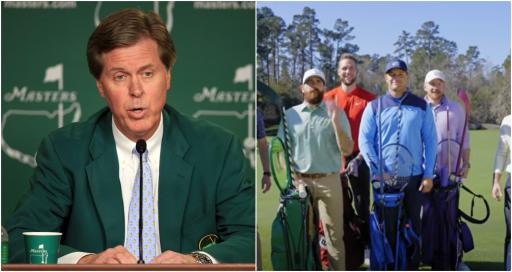 Fred Ridley says he had "never heard" of Dude Perfect before explaining his decision to allow the YouTubers to film a video with Bryson DeChambeau at Augusta National.

Dude Perfect, famed for their extraordinary trick shots, have amassed an astonishing 57 million subscribers on YouTube and were given permission to film an All Sports battle against DeChambeau.

If you were unaware, All Sports sees competitors given a bag full of sports equipment. Bows and arrows, hockey sticks, tennis rackets and pool cues are just some of the equipment used.

Then they must that equipment to try and get the ball in the hole in the fewest possible strokes.

Jim Nantz also narrated the action and it drew an interesting reaction from the golf world.

Some were aghast to see Augusta National's pristine fairways and greens being used in such a way. Others loved it. Ridley was asked about it all in his Wednesday press conference.

What was the thinking behind it all, and how did the negotiation work? More importantly, did they have permission?!

Ridley said: "You are referring to the Dude Perfect guys, right? My first reaction was, 'Who are these guys? Y'know, I've never heard of them'

"But... it was something I got comfortable with very quickly. Number one, these are very upstanding young men, who, it was obvious to me... [there was some] third party discussions of people who had been dealing with them and some things they said actually on video.

"They had the utmost respect and reverence for Augusta National and so, it was really part of our continuing effort to be relevant to different age groups and, y'know, I understand...going in we knew this group had 57 million followers on YouTube.

"And, that sort of got my attention. The results of the video have been great. I think the last time I saw and I'm sure it's growing more than that there had been five thousand...rather five million views, it was trending, and it was the number one YouTube video at the time."

He added: "I think it accomplished what we wanted to. I have heard from a number of my law partners who have teenage children who said, 'This is great, my kids want to go out and play golf.'"

"So that's sort of the idea. We'll look at more things like that but always through a lense of our culture, respect for the game and respect for the institution of this place."