The Masters: What is happening here between Tiger Woods and Rory McIlroy?

Tiger Woods was engaged with Rory McIlroy in what look like an interesting conversation about wedges. 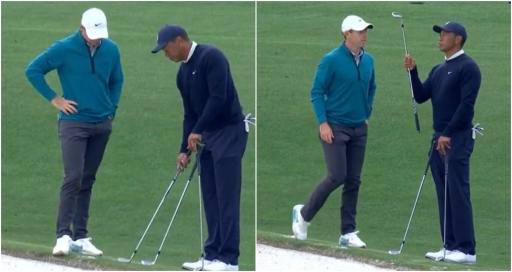 Jon Rahm made light of the fact that Justin Thomas was the only person to receive helpful advice from Tiger Woods, but perhaps he can add Rory McIlroy to that exclusive club.

Footage has emerged of Woods, 46, greeting Rory McIlroy, 32, ahead of the 86th Masters at the practice area and appearing to give him some advice on his wedges. It's a part of McIlroy's game that he has admitted he has struggled with.

In the clip Woods takes McIlroy's wedge and bangs it onto the Georgia turf a few times before he pauses and takes a look at the club. What exactly was going on there? He even holds the club up in the air to inspect it.

Earlier in the week Rahm joked: "I think there's only one man in this field that hears advice from Tiger because I've asked before and I get nothing. So you might need to ask Justin Thomas because I'm not.

"I've asked him [Woods] before. I remember asking him at East Lake the year he won, before on the putting green in the practice round, Hey, man, any tips for Bermuda? Or this and that. He turned around and said, It's all about feel, and just kept going. I was like, 'Cool, thank you.'

"Yeah, I asked him at Albany once about chipping into the grain. [He said] You just got to be shallow. Okay. Meanwhile I turn around and J.T.'s there with him, and he's getting a whole dissertation on what to do."

“and that’s how you hit a wedge, Rory” pic.twitter.com/AZfOIHZS9F