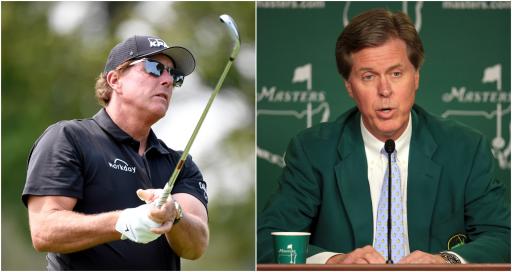 Phil Mickelson was allowed to play The Masters and was not "disinvited" despite widespread speculation he was told to keep away.

It has not been confirmed but it is generally understood that Mickelson might be currently suspended by the PGA Tour.

PGA Tour commissioner Jay Monahan previously stated he would need to have a conversation with Mickelson before any potential return.

That comment was made during a press conference at The Players Championship where he also said "the ball" was in Mickelson's court.

Mickelson's sabbatical from golf came off the back of his comments and workings to help Greg Norman's Saudi-backed golf league.

He has never made a public statement about his absence from The Masters.

His name was quietly place into a list of past champions not playing on the official website.

Fred Ridley, the Augusta National chairman, faced the media on Wednesday ahead and said the decision was Mickelson's and his alone.

"We did not disinvite Phil," Ridley said.

"He is a three-time Masters champion. Phil reached out to me, I think in late February, early March and let me know he did not intend to play.

"That was by way of text. I thanked him for his courtesy of letting me know."

Mickelson last played on the PGA Tour at the Farmers Insurance Open at Torrey Pines. He missed the cut.

His last appearance was at the Saudi International in February.

Mickelson apologised for his behaviour and "reckless" comments.

He added: "The past 10 years I have felt the pressure and stress slowly affecting me at a deeper level."

He also said: "I know I have not been my best and desperately need some time away to prioritize the ones I love most and work on being the man I want to be."

Lefty also did not attend the annual Champions Dinner earlier in the week.