What did Hideki Matsuyama pick to be served at Masters Dinner?

Hideki Matsuyama has previously said he is more nervous about his speech at the Masters Club Dinner than playing golf this week. 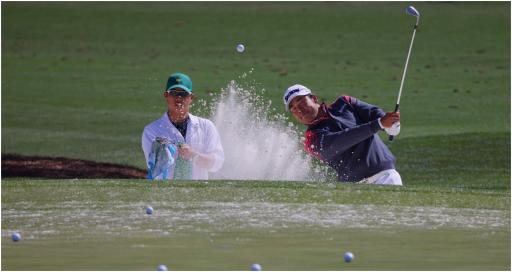 Hideki Matsuyama found it difficult to keep secret what menu he selected for the Masters Club Dinner, but now it has finally been revealed.

Defending champion Matsuyama became the first Japanese golfer to win at Augusta National last year and previously admitted he was more nervous about his speech than playing golf.

He will address the room of former champions later tonight in English, he said, before they all tuck into a mouth-watering feast.

For the main course there is the option between miso glazed black cod served with a dashri broth or miyazaki wagyu served with mixed mushrooms and vegetables.

For dessert, diners will tuck into Japanese strawberry shortcake with whipped cream and amaou strawberries.

The tradition of the previour year's winner hosting the champions dinner in the Augusta clubhouse was started by Ben Hogan in 1952.

Dustin Johnson, who won The Masters in 2020, last year chose a main course of prime filet mignon with mashed potatoes and spring vegetables or miso marinated sea bass as his main course.

His starter was a garden or caesar salad.

For dessert, he chose peach cobbler or apple pie with vanilla ice cream.

His trio of desserts included classic fan, churros with chocolate suace and sopapillas.