Matthew Wolff played his first three holes of The Masters in 4-over-par as his poor form on the PGA Tour continues. 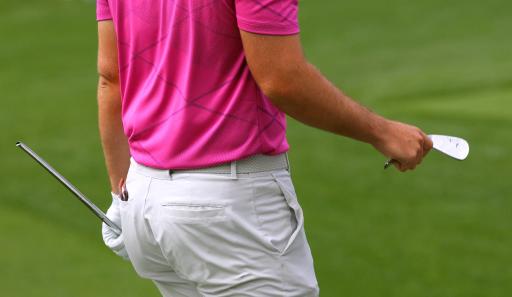 Matthew Wolff let his anger get the better of him after just four holes of The Masters on Thursday at Augusta National.

Wolff started poorly in the first major championship of the year. He made a double-bogey on the 1st hole, a bogey on the 2nd hole and another bogey on the 3rd hole.

The 22-year-old has been at boiling point in the past and his frustration took its toll as he snapped his club after one particularly bad shot.

At The Players Championship, Wolff made headlines when he threw his club into the water that runs down the lefthand side of the 18th hole at TPC Sawgrass.

We don’t want to concern the 5 players who picked Matthew Wolff, but he’s started Double Bogey-Bogey-Bogey and just snapped his club after the 4th hole… #JKCharity #TheMasters pic.twitter.com/EQPwRxcjo0

Augusta National hasn't exactly been a happy hunting ground for Wolff in his recent appearances. In 2021, he was disqualified after signing an incorrect scorecard.

Shortly after that week 12 months ago, Wolff took a two-month break from the PGA Tour to deal with his mental health issues, issues he has since been very open about.

Wolff burst on to the scene with a win at the 3M Open in 2019. But despite such promise since then, he only achieved two top-10 finishes on tour last season.

He has missed the cut in three of his last six events and he has dropped to number 45 in the world rankings, with his previous high being 12th.

He now has an uphill battle to make the cut at The Masters, so let's hope there are no more snapped clubs or tantrums in the next couple of days.