Jon Rahm has revealed the amazing reaction from Tiger Woods after the 15-time major champion was put on the clock by officials at the 2022 Masters. 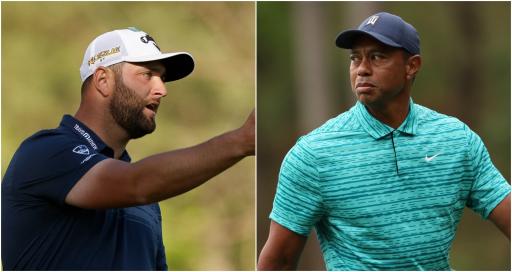 Jon Rahm has revealed an hilarious anecdote of how Tiger Woods was put on the clock by officials at the 2022 Masters.

Cast your mind back to the 86th edition of the tradition unlike any other and you may recall it was Woods mania.

It followed months of Tiger-related content and speculation on whether he would may his long-awaited return to the game following his car crash.

There was footage of Woods practising alongside caddie Joe LaCava at his home course in Jupiter, Florida. That was swiftly deleted.

Then there was his private jet that was tracked to Augusta National prompting more speculation. In the end, Woods played and made a sensational run to make the cut but laboured over the weekend.

Woods, 46, was paired with Rahm during the final round and the Spaniard has revealed the five-time Masters champion was put on the clock by officials.

We'll let Rahm - who has recently come out swinging in support of LIV Golf - take over the story from here:

Related Articles
Two-time Masters champ worried about tension with LIV Golf players at Augusta
TWO more players added to The Masters field as PGA Tour clash with LIV Golf
"We all looked at the official, like, 'He can’t walk any faster, let's be honest.' Like, he was already doing an amazing job trying to move up and down those hills."

Rahm said that he was a little bit ticked with the official because they had to wait a considerable amount of time on No. 8.

"We all joked around with the official, and then when he turned around, Tiger takes off. And I'm looking at my caddie, like, well, this is incredible.
"We saw the reality afterwards that the cameras don't see. He puts on a bit of a show for the camera, like, he's not going to show how much he's really hurting.
"But when we finished scoring, just seeing him stand up and move around that room when there's nobody watching, there was a difference. Especially after playing 18 holes and after sitting down when your legs cool off a little bit, it changes."

Rahm previously hit the headlines when he joked about the different treatment he has received from Woods compared to other players.

The 2021 U.S. Open champion explained before the 86th Masters he once asked big cat for some technical advice. He got none.

Then a few moments later he turned round and saw Justin Thomas receiving "a whole dissertation" from Woods.

Things are a little bit different now, it seems.

"Maybe because of my comments in the past he was a lot more talkative in that round. I don't know if he was just trying to prove a point to me or not, but he was a little bit more talkative and he shared a lot of great stories, a lot of personal stories.
"I asked a little bit about golf and parenting … He was very open about it and very respectful about. It was great, it was great. It will be a round I remember for a long time."

Woods has signalled his intentions to keep trying to play professional golf.

During his pre-tournament press conference at the Hero World Challenge he said the plan was to play all the majors in 2023 if he is able to and then maybe "one or two more".

"Physically that's all I can do," he said.