Jon Rahm outlined a hilarious story about Justin Thomas and Tiger Woods ahead of The Masters. 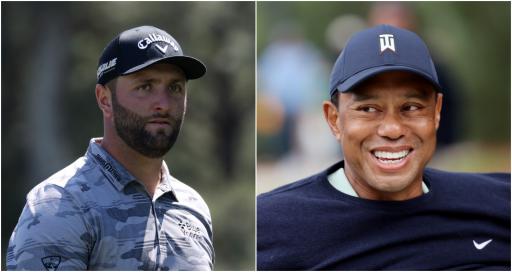 It is no secret Tiger Woods and Justin Thomas are great friends. But maybe Jon Rahm is a little bit jealous of how much tutelage his American rival receives from the 15-time major champion.

More: How to stream The Masters for free online

Woods, 46, has previously described Thomas as like his little brother and also that his son Charlie looks up at JT like an older sibling.

Earlier in the week, Woods' former coach Butch Harmon stated that such was the closeness of their friendship he would struggle to get any insider information about his former students rehab progess.

Woods tried to maintain a low profile as he scouted Augusta National before officially announcing that he was intending to try and play.

At the time he had played a practice round with Thomas and Harmon stated that if he called up JT to ask how Woods was playing he wouldn't divulge any information whatsoever. It's the way Woods and his camp like to run things.

Rahm faced the media ahead of The Masters where he dived deep into fatherhood, his game and how he "couldn't care less" that bookmakers have him as the favourite to win.

But there was one little nugget in there that was utterly hilarious, and that's how he simply cannot get any tips from Woods.

Rahm was asked about Woods' relationship with Seve Ballesteros and it was touched upon how the Spanish legend had given the junior phenom some helpful advice with how to play Augusta National.

More: Tee times for rounds one and two of The Masters

Has he reached out to Woods for help?

"I think there's only one man in this field that hears advice from Tiger because I've asked before and I get nothing. So you might need to ask Justin Thomas because I'm not," he said.

He added: "I've asked him before. I remember asking him at East Lake the year he won, before on the putting green in the practice round, 'Hey, man, any tips for Bermuda?' Or this and that. He turned around and said, 'It's all about feel', and just kept going. I was like, 'Cool, thank you.'

Rahm continued: "Yeah, I asked him at Albany once about chipping into the grain. [He told me] You just got to be shallow. Okay.

"Meanwhile I turn around and J.T.'s there with him, and he's getting a whole dissertation on what to do.

"Yeah, I've been able to ask other players. I've picked Phil's [Mickelson] brain around here, Ollie [Jose Maria Olazabal] a little bit. But I feel like the course when Ollie played it and he played his best golf has changed a little bit.

Next page: Bookies slash odds on Tiger Woods to win The Masters