Tiger Woods says he walked and played nine holes in 5-under par... 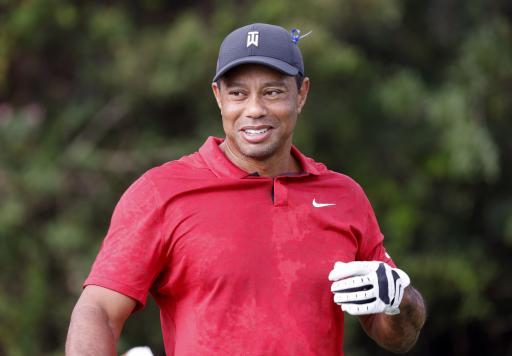 Tiger Woods has revealed how he was regularly shooting rounds of 64 and 65 in practice before his latest injury setback that forced him to withdraw from his own Hero World Challenge this week.

Woods, who was speaking to Golf Channel's Todd Lewis at Albany on Tuesday, told how he recently strolled his way around his local course to shoot 5-under par for nine holes.

But just when Woods was ready to make his first competitive start since missing the cut in the 150th Open Championship at St Andrews in July, the 15-time major champion has now developed plantar fasciitis, which is a common issue in the foot that causes pain in the heel and sole of the foot.

Woods of course has still been nursing serious leg injuries sustained during his horror car crash in Los Angeles back in February 2021.

Throw in the fact he was also recovering from multiple back surgeries before that shocking incident, and you begin to see just how rough Woods has had it in recent times in his bid to return to competitive life on the PGA Tour.

The signs have been good though.

"I was playing at home quite a bit, playing 18 holes shooting 65s and 64s, and walked one nine holes and shot 5-under, I was playing well," said Woods, who turns 47 on December 30.
"But it's the added load, the back-to-back days, in a tournament situation of four days in a row. My planner just didn't like it. The only thing I can do for it is to rest it. Obviously scrape it, ice it, stretch it, it just takes time."

On another positive note for Woods, he told Lewis that he is able to do a lot more with his body than during the summer.

"Oh yeah. The scores I was shooting were good. I was doing beach walks. I was leg pressing a lot. I was doing a lot of different things that I hadn't been able to do all year," said Woods.
"I had a couple of setbacks, procedurally. That took time, and getting ready for a major championship that didn't quite work out the way I wanted it to. It's part of the process."

Woods is expected to join Rory McIlroy in The Match against Jordan Spieth and Justin Thomas on December 10, a week before joining his son Charlie Woods in the father-son PNC Championship.

But on a more competitive basis in 2023, Woods is going to once again target the four major championships.

Anything else will be a bonus, such as competing in his annual Genesis Invitational at Riviera.

"I'm not going to play as much going forward, we all know that," continued Woods.
"Just picking my spots and hopefully everything cooperates where I can play.
"Every year will be the same, it will be the same four [the majors], and then it's whether or not I can play any more? I would like to."

Woods urged Greg Norman to quit his position as LIV Golf CEO during his press conference with the media this week.

Earlier today, Woods was spotted out on the practice putting green helping amateurs with their stroke.

#NEW: Tiger out on the Albany practice green this morning and helping amateurs with their putting ahead of the pro am pic.twitter.com/gs1SbGPNp3