Scottie Scheffler's Nike Gilet catches the eye at The Masters

Scottie Scheffler was feeling the cold weather on Saturday at Augusta National and in between shots, he wore his black Nike gilet to keep him warm. 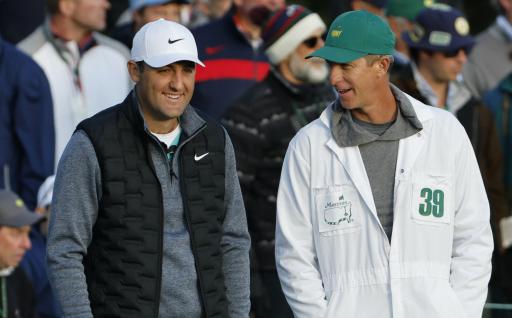 It wasn't just Scottie Scheffler's cool, calm and collected golf in the third round of The Masters that caught the eye of golf fans. It was also his clothing choices.

While Scheffler was walking in between shots at Augusta National, he put on his black Nike gilet but on many occasions, he struggled to get it on his back.

The World No.1 told the media after his round of 71 that he purely used the gilet for warmth and he didn't want to hit any shots with it around his body.

The cold and windy weather made playing conditions very difficult at The Masters on Saturday, with Cameron Smith's 68 being the low score of the day.

Nonetheless, despite Scheffler's occasional battle with his Nike gilet, it didn't stop him from maintaining a healthy three-shot lead heading into the final round in Georgia.

Despite blunders on the 14th, 15th and 18th holes, the 25-year-old remained calm and carded a round of 1-under-par to reach 9-under-par for the event.

A poor hooked drive on the 18th hole concerned Scheffler, but after finding his ball in a bush and taking an unplayable, he made a clutch bogey to keep his lead.

If the wind lingers and the sun stays in on Sunday, maybe Scheffler's gilet will have to reappear. Take a look below at the best reactions from golf fans over Scheffler's clothing choice:

I've watched Scheffler put that gilet on maybe twenty times now, and he hasn't mastered that skill yet... #Masters2022

I'm going off Scheffler purely because of the gilet hokey-cokey he's played since the start of this round. Just put it on and keep it on! After all it hasn't got any sleeves for goodness sake so I can't see how it can affect his swing. #themasters #golf #clothing pic.twitter.com/LDTTDjnqvz

Next Page: Shane Lowry SWEARS at his caddie during third round of The Masters