Jon Rahm said you could hurt someone if you tried to teach them Scottie Scheffler's swing as he stormed clear at The Masters. 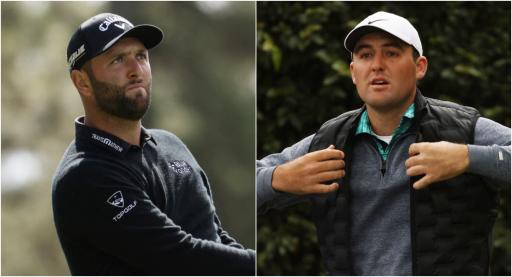 Jon Rahm described Scottie Scheffler's swing as 'unteachable' as he looks for his first major title at The Masters on Sunday.

When Rahm was asked about Scheffler's unorthodox leg movement which has been on show at Augusta National, he said you could hurt someone if teaching them these movements.

The Spaniard was knocked from the top of the world rankings by the talented American when he won the WGC Match Play at Austin Country Club.

"You can't teach that. No, it's unteachable. If you try, you'd probably end up hurting people," Rahm said after his third round at The Masters.

"Matthew Wolff's swing, again, unteachable. If you try, you end up hurting yourself. Same with a bowed wrist. You can learn a bowed wrist, but if it's not natural to you, it will hurt you.

"There's a lot of things in a person's swing that just comes natural and you can't really teach it. It can't be a coincidence that two great ball strikers, Greg Norman and himself, have that in common. There's got to be a reason why it's functional."

The 27-year-old, who was beaten by Scheffler in the Sunday singles of the 2021 Ryder Cup, was highly complimentary of the man at the top of the leaderboard who has experienced a meteoric rise on the PGA Tour.

He has won three times in his last five appearances on the circuit and he is on course to join Rahm as a major champion.

As for Rahm, he has played consistently in 2022 without winning. He has made four top-10's in nine events and he came second at the Sentry Tournament of Champions.