The Masters ceremony: Why do they play for a green jacket?

This is the story behind why they always play for a green jacket at The Masters. 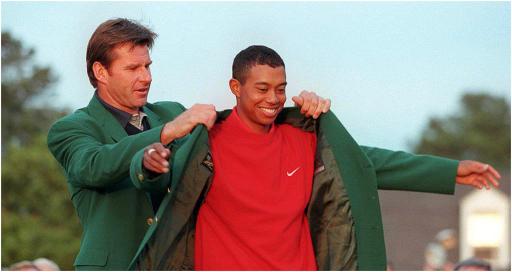 The Masters is perhaps one of the finest spectacles in all of sport. Even non golf lovers can be found glued to their screens.

Every year the victorious player is presented with the green jacket from the previous winner. It's an emotional moment for all involved.

The story of the green jacket does indeed have an interesting past. That is all down to Augusta National co-founder and legendary golfer Bobby Jones.

Jones, who was a lawyer by trade, once attended a dinner at Royal Liverpool golf club in Hoylake in 1927 and all the captains were wearing red jackets.

Jones was extremely impressed by what he saw. He thought it looked smart and offered the type of gravitas he felt American golf lacked.

When Augusta was founded in 1933, members of the club wore green jackets so as to be easily recognisable if fans needed to ask questions.

Members reportedly weren't keen on the idea initially, but it soon caught on.

They didn't want the colour red. Yellow and even peach were considered. They settled on the colour of the leaves underpinning the azalea bushes: verdant green.

The green jacket was publicly debuted in 1937, becoming a symbol of membership.

Then, in 1949, the idea for the winners of the tournament to wear one and keep it for life was accepted, with the Champions Club established.

The winner of the tournament automatically qualified for the rest of their career. The first golfer to win the green jacket was Sam Snead.

After the final round is completed, the green jacket ceremony takes place.

The new champion slips into the green jacket with the help of the previous year's winner.

If a player win the tournament two years in a row, then the Augusta National chairman presents it.

A custom version is then tailor-made specially for him.

Jack Nicklaus has the most green jackets with six victories between 1963 and 1986. Tiger Woods has five.