The Masters R3 tee times: When do Tiger Woods and Scottie Scheffler tee off?

Tiger Woods will tee it up with Kevin Kisner in the third round of The Masters on Saturday, while World No.1 Scottie Scheffler will be off last with Charl Schwartzel. 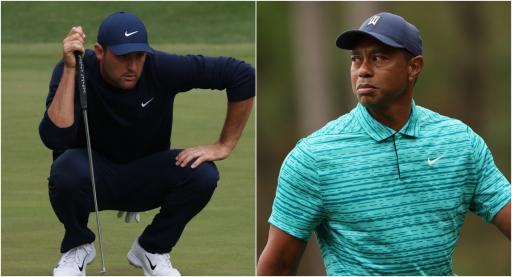 Tiger Woods will tee off at 6.00 pm UK time in the third round of The Masters as his 36-hole score of 1-over-par saw him safely into the weekend.

Woods made a bad start to his second round on Friday by making four bogeys in his first fives holes, but he battled back to card a 74.

The five-time Masters champion made birdies on the 10th, 13th and 14th holes to claw back his score. He is currently in tied 19th place on his first appearance on the PGA Tour in 508 days.

Scottie Scheffler produced a scintillating back nine at Augusta National to open up a five-shot lead. He made four birdies in his last seven holes to card a 67.

The World No.1 reached the peak of the rankings after winning the WGC Match Play and he is on course to win his fourth event on the PGA Tour in his last six starts.

The 25-year-old, on 8-under-par, will tee it up with the 2011 Masters champion Charl Schwartzel on 3-under-par. He is in tied second place with Sungjae Im, Shane Lowry and Hideki Matsuyama.

All of the tee times below are in UK time: