Tiger Woods safely saw himself into the weekend at The Masters, but his score of 1-over-par is nine shots behind World No.1 Scottie Scheffler after two rounds. 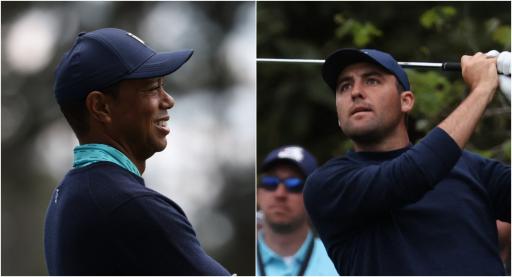 Tiger Woods made the cut on day two at The Masters after battling the elements at Augusta National, as Scottie Scheffler built a huge lead after 36 holes.

Woods overcame a tough start to his round to card an admirable score of 74. Combining this with a round of 1-under-par on Thursday, he sits in tied 19th place and nine shots behind Scheffler.

The five-time Masters champion bogeyed four of his first five holes and he fell back to 3-over-par for the week. He battled back with solid birdies at the 8th and 10th holes.

Despite back-to-back bogeys on holes 11 and 12, he showed the fighting spirit on the back nine that helped him to win his 15th major title at Magnolia Lane in 2019.

Woods found birdies at the 13th and 14th holes to card his score of 2-over-par. Augusta National played very hard on Friday, but not for Scheffler whose hot streak continued in Georgia.

He became World No.1 after winning the WGC Match Play at Austin Country Club and his score of 67 on day two has given him a healthy five-shot lead heading into the weekend.

Scheffler's lead of five ties the Masters record for a 36-hole lead at Augusta National.

Four of the five previous players with a five-shot lead at the 36-hole stage went on to win the tournament.

Jordan Spieth was the last player to hold a five-shot lead at The Masters in 2015 and he went on to win by four shots.

Scheffler, 25, played his first eight holes in 1-under-par, but his round caught fire on the back nine.

Despite an errant drive on the 18th hole, he recovered to make a par to equal the joint-lowest score of the second round. Justin Thomas also shot a 67 to reach 1-under-par for the event.

Harold Varner III, Dustin Johnson, Cameron Smith and Kevin Na all sit on 2-under-par in a tie for sixth place heading into the weekend.

Jordan Spieth, Brooks Koepka, Xander Schauffele and Bryson DeChambeau were all notable names to miss the cut on Friday.