Scottie Scheffler leads by three shots heading into the final round of The Masters and he will be in the final group with Cameron Smith on Sunday. 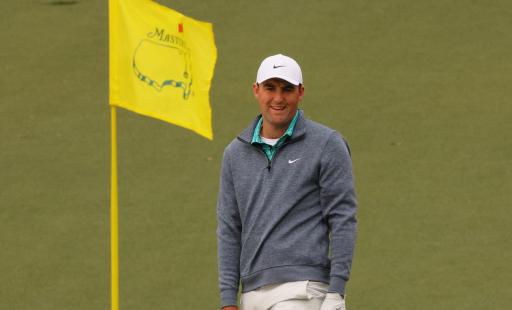 Scottie Scheffler gave his rivals a glimmer of hope at The Masters on the final hole of the third round. His errant drive led to a bogey and this cut his lead from four to three shots.

However, Scheffler was impressive throughout his round on Saturday. His calm demeanour caught the eye and his score of 71 took him to 9-under-par.

Cameron Smith lingered in the final round and shot the best score of the day, carding a 68 to reach 6-under-par. The Australian made six birdies to apply pressure to Scheffler.

This pair, who have both won at least twice on the PGA Tour this season, will be in the final group and will tee off after Shane Lowry and Sungjae Im at 7.50 pm UK time.

Tiger Woods struggled in the cold and windy conditions in the third round at Augusta National. The 46-year-old made two double bogeys and five bogeys on his way to a 78.

Related: Shane Lowry SWEARS at his caddie during third round of The Masters

It appeared that Woods struggled more than ever with the hilly terrain of Augusta National yesterday. He and Jon Rahm are 7-over-par for the week and will play together in the final round on Sunday.

All tee times below are in UK time.

Next Page: Scottie Scheffler leads by 3 at The Masters as Tiger Woods toils on day three