Shane Lowry was extremely unhappy with a lay-up shot that he hit on the par-5 13th hole and he gave it to his caddie with both barrels. 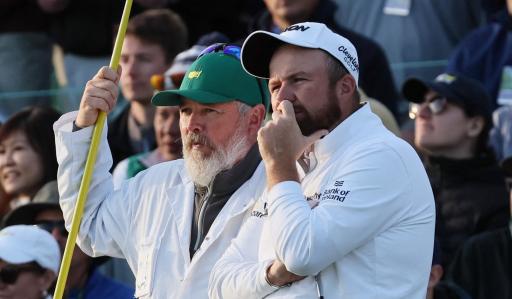 Shane Lowry swore at his caddie during the third round of The Masters after he hit a poor lay-up shot on the par-5 13th hole.

Lowry, who was 4-under-par for the event in the middle of the fairway of the 510-yard hole, hit his second shot to within 119 yards of the green.

He only hit his lay-up shot 125 yards down the hole and with the pin tucked tight into the front of the putting surface, the former Open champion was very unhappy with this shot.

"Left myself no shot. What a f*****g s*** lay-up that was. Well done. Well done Bo. Only 30 yards out. Well done," Lowry said to his caddie Brian "Bo" Martin after finding the green with his third shot.

Related: The Masters: Did you notice Cameron Smith lining up his putts like this?

The Irishman went on to make a bogey out of nowhere and he fell back to 3-under-par and with even more ground to make up on the leader Scottie Scheffler.

Martin has been caddying for Lowry since 2018 and together, they won The Open Championship in 2019 and played at the Ryder Cup in 2021.

Real class from Shane Lowry taking it out on his caddie after a poor wedge shot into 13. “Nah, left myself no shot. What a f***ing s*** layup that was. Well done. Well done Bo. Only 30 yards out. Well done.”

Lowry has had a great week so far at Augusta National and he is aiming to improve on his previous best finish of tied 21st at last year's tournament.

The 35-year-old played particularly impressively in the second round when he shot a 4-under-par 68. This was the second-best score of a blustery day in Georgia.

Lowry would end up shooting a disappointing third-round 73 to fall back to 2-under par for the tournament and seven shots behind leader Scheffler.

What do you make of Lowry having a pop at his caddie after hitting a poor wedge shot? Share your thoughts and comments over on our social media channels.